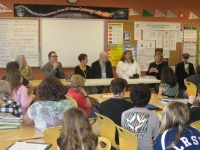 The truth in journalism panel discussion was wide-ranging.

It was an exciting day in Mr. Spooner’s class On Friday, March 18th, unlike any other day, his morning group was there also. There were people who came in his class to read the book "Nothing but the Truth." The students asked a wide range of questions based on truth in journalism and the panelists’ particular occupations. That is why the people came to the discussion. The people that came to answer our questions were Mr. Gill from Scene Magazine , Mr. O’Bryan and Ms. Voinovich from the Lakewood Observer, Doctor Hammel from Ursuline College, Mr. Mulready from Cool Cleveland.com, and Mrs. Neff and Mr. Neff from the Cleveland Plain Dealer.

The first thing they did was introduce themselves. Mr. Mulready is the founder and a reporter for Cool Cleveland.com. Mrs. Neff is an editor for the Plain dealer. Mr. Neff is a reporter’s assistant for the Plain Dealer and graphics. He uploads his material to Cleveland.com. He only puts graphics on stories that need them to illustrate the story being told. Mr. O’Bryan is a publisher and a photographer. Dr. Hammel is a professor in journalism and public relations at Ursuline College but does not consider herself a journalist. Ms. Voinovich is a reporter for the Lakewood Observer. When they were done introducing themselves we moved on to students asking questions.

It was one of the most interesting afternoons ever in Mr. Spooner’s class! We would all like to thank the people who came to this discussion to teach us about the importance of truth in journalism and also to thank Mr. Spooner for inviting these wonderful and interesting people into our classroom. It gave us a big learning opportunity.

I was counting down the days for our class Skype with Avi, and then the day finally came! It started when Mr. Spooner, our language arts teacher, announced we were going to be reading a book called, "Nothing But the Truth," written by Avi.

Avi is a well-known writer born in New York City. He and his twin sister Emily Wortis were born on December 23, 1937. He has written about 70 books and between us we have read about ten. We love them all! They keep you interested and entertained. So, when we found out we would be Skyping with him, we nearly jumped right out of our seats!

Our assignment as students was to create questions to ask him during a Skype conference we would have with him. Waiting was the hardest part, but when the Skype video conference finally came, we were very nervous to talk to a well known writer-- but after we asked our questions, we felt very comfortable talking to him.

Each of us asked  two-part questions and got  very thorough responses. All of our questions had different spins on them, and each response Avi gave was different. Not only was asking the questions exciting, but listening to him respond to everyone’s questions was also interesting.

An important thing we remember from the Skype, is a very important piece of advice: “You have to read. And then when you are done reading, read some more.” Avi said to make sure we include this in our article. He also said to write that he loves talking to students around the world, and giving them tips on how to make their writing better.

Meeting Avi was an experience of a lifetime, and we believe the whole class learned a lot. He explained in great detail his career, and his style of writing. I feel that I learned a lot more about the writing process and his books.

We all had an incredible time and I hope I have many more experiences like this one.