by Rachel Daso and Clare Ciolli 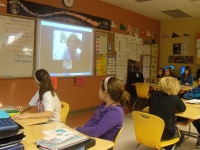 When the war began in 2003, it changed many lives, especially one Kurdish girl’s. The students in Mr. Spooner’s social studies class had a Skype video conference with Ms. Maria, a Kurdish lady that now works for the United States State Department as an interpreter. Her story of survival is inspiring.

We had this opportunity with Ms. Maria because she works with Lt. Demro (who we Skyped with a few weeks ago).  She knows many languages and practices Kurdish religious ceremonies. Some questions we asked her were about how her troubled childhood has affected her current life, how she felt going through the many hard times, and about her interesting culture. We felt this Skype video conference really tied into our social studies class and helped us to learn a lot about what the United States does for people around the world.

Earlier in her childhood, Ms. Maria’s family fled to the desert to escape Sadam Hussein’s regime. He was showing every educated person that could stand up to him that he was in control. From where she was hiding in the desert it was an hour to the nearest town. Her father did not work, so the quality of their financial state dropped quickly. Her family had to live in the desert for three years. She said that her faith was what kept going.

After living in the desert, Ms. Maria and her family moved back to Baghdad but were put under house arrest. The conditions were gruesome. They could not afford air conditioning so they put blankets on their windows, and water on the floor hoping that it would cool down the house they were trapped in. Their meals would consist of only bread, cheese, and water. They had to live in these conditions for nine years!

Ms. Maria told us how she felt like she lost her childhood because of her lost of freedom and independence. Because of here previous education with different languages, she applied for a job to be a translator for the United States Army. After a while, she got the job.

This job was the turning point in Ms. Maria’s life. She told us how getting the job was like getting “reborn”.  Because of the Army, she is now living a better life helping other people as a caretaker and translator.

We would like to thank Ms. Maria and all of our veterans for helping to protect our country. Ms. Maria asked us to make sure to write that she thinks that “The United States Army is the Best!”