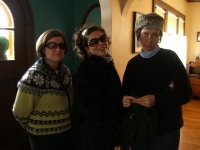 The 2010 Knit Olympics, Lakewood, began February 12. As viewers the world over watched the Olympic torch lighting in Vancouver, BC, twelve intrepid knitters from around northern Ohio began an epic journey of their own.

Their mission: cast on, or begin, a knitting project during the Vancouver Olympics Opening Ceremonies and find within themselves the courage to finish before the Closing Ceremonies seventeen days later, February 28.

“It was so much fun! I haven't seen Iselin (DiMacchia) for months so it was great to see her in this setting,” said Lakewood's Laura Abrahamsen.

The knitters ranged from age eight to “over 40.” They presented a wide array of interests and skills, which was reflected in their projects. Scarves, shawls, toys, and sweaters were among the knitting challenges. The complexity of projects also varied. Basic garter stitch as well as Fair Isle techniques and cablework made up the pieces, each a challenge to its creator.

Two Knit Olympic events were held at WYIF Arena in Lakewood. The first, held February 13, gave the athletes dedicated time to get out in front of the pack and make serious headway on their projects. Six participated. The knitters worked steadily, with coffee, tea and snacks available to sustain their caloric needs. TVs were also available to watch the other Olympic athletes in their pursuits.

Perhaps taking a cue from Vancouver Olympic athlete Shaun White, the remaining six knitters began their journeys in their own private knitting facilities. Speculation arose that this tactic would give them a greater edge on the competition.

Jill Milenski of Lakewood said, “It was really fun. It forced me to complete a lot of work in a short period of time.” Kathleen Gill-Slee of Toledo agreed, “I work better with a deadline. Competition helps, too.”

As the 17 days wore on, reports of dropped stitches, interrupted work days, and even necessary Frogging trickled in. (For non-knitters: Frogging is what knitters do when errors are noticed in prevously completed rows: they “rip it” out). These setbacks were no match for the athletes. . .

The proof was in the knitting on Sunday, February 28. Again converging on WYIF Arena, eight of the twelve knitters brought their Olympic efforts with them in the hopes of taking home the gold. A number of projects were not quite complete, but several committed knitters succeeded in making the final push to finish.

Three judges, representing France, Russia, and Germany, judged the event. The German judge kept everyone on task, in spite of the Russian judge's expressed willingness to accept bribes. The judges resurrected the old 6.0 scale formerly used in figure skating and evaluated the knitted items on technical and artistic merit. The judges tallied and averaged the scores to establish the winners.

The judging was not tainted as far as the Lakewood Knit Olympics Committee (LKOC) knows. In hindsight, the French judge said, “One of the hardest aspects of the judging was the technical merits vs. the finished projects. There were many Evan Lysaceks and Evgeni Plushenkos in the competition. Fortunately, all Olympians displayed true Olympic sportsmanship.”

With mere tenths of a point separating the medalists, Jill Milenski (Lakewood) claimed the Bronze for her three projects: one pair of socks, and two “Amigurumi” toys—a “Nessie” monster and a jellyfish. Christina McCallum's (Lakewood) cap sleeve sweater was not finished, but the complexity of the its cabled pattern earned her the Silver. And, as previously noted, Lori Thorrat (Lakewood) scored Gold with her completed two color, Fair Isle Christmas stocking.

The judges created an “honorable mention” fourth place prize for Kathleen Gill-Slee (Toledo), whose yellow, cabled hoodie vest missed Bronze by a fraction of a point. And they created a Junior Level recognition for Patrick McCallum, who made quite an effort with a scarf.

In addition to their medals and bragging rights, winners received ceramic “yarn bowls” made by Kathleen Gill-Slee. Gill-Slee throws pottery in a studio at her Toledo, Ohio home.

Bronze medalist Jill Milenski said she was, “Pleasantly surprised that there were judges. That made it so much more fun.”

Now that the Lakewood podium is empty, and the Vancouver Olympic flame is on its way to Sochi, many eyes look with anticipation to 2014. Four years of training lie ahead; four years until the next Knit Olympics. You, too, could compete, stay tuned!