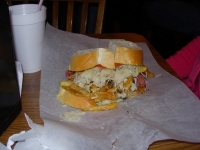 View Image Gallery
Cleveland has long been thought of as a sports town -- not because of the multitude of championships over the past decades (let’s not forget the Crunch), but rather an allegiance of the fan base to the various franchises: Browns, Indians and Cavaliers. We’ve now had yet another Super Bowl in which the Browns were not participants. Another occasion for warm beers and cold pizza. Another occasion for, “Wait till next year.” One more year where I have to forego writing with recipes for a Browns Super Bowl party.

For a good many years, I counted myself among those rabid followers of the Cleveland Browns and reminisce fondly about the frost-bite suffered during the double overtime victory over the Jets in below zero temperatures. While in recent years my physical attendance to watch games has given way to more comfortable climes for the same purpose, I nevertheless feel compelled to exercise that Sunday ritual. It was a ritual that I believed should be passed on to my children and in an endeavor to do so, when the Brown’s were reborn from the ashes of mediocrity in 1999, along with my PSL, I also obtained Dawg Pound seats.

My intent was to make them available to my then, high school aged son so that he and a friend could accompany us to tail gates and ball games, and learn what it means to be devoted to the City’s flagship franchise; but, after two years of inviting, asking, and cajoling only to be rebuffed with responses of, “football is a dumb game,” I finally gave up those Dawg Pound seats, convinced that Jason would never understand how football, much like a tick, can get under your skin.

Time has passed and that teenaged son is now in his mid-20’s. As fate would have it, he has taken up residence in of all places, Pittsburgh, Pennsylvania. The home to our ARCH ENEMIES: the dreaded Pittsburgh Steelers! I find that I must count myself an utter and complete failure as a father because now, that son who eschewed sporting events and particularly football has become a card carrying fan of the Pittsburgh Steelers. And they at least get to go to the playoffs every now and then. Sometimes they even reach the Holy Grail of sporting events, the Super Bowl. So, while we were forced to watch those dreaded Steelers, and drink our warm, tear laden beer during Super Bowl LXIII, my thoughts turned back to a recent excursion to Pittsburgh to spend some time with him over the New Year's Holiday. While there, we decided to take in some of the sights and sounds of his new home city.

Like spies, Mangini undercover agents, we descended into a city that was in the midst of Playoff fever, something most living Browns fans have only read and dreamt about. It seemed as if every truck and car sported some kind of Steeler paraphernalia, bumper sticker, flag, or helmet. Even though there was no game scheduled that weekend, most of the throngs we encountered wore Steelers jerseys, parkas, hats, and gloves. Every jersey bore foreign sounding, alien names, like Palamalu and Roethlisberger. We headed down to the strip district (not to be confused with exotic clubs, but rather with its former use as an industrial strip) where we found ourselves at the Primanti Brothers Bar and Restaurant, an original depression era establishment in Pittsburgh, made famous by its humongous sandwiches and reasonable prices.

Unfortunately as we walked in, in much the same way as the Sportsman in downtown Cleveland features a mural of Jim Brown following a Gene Hickerson block, the Premonte Brothers features a mural of Chuck Knoll and the Steel Curtain, an artistic depiction of Franco Harris’ “Immaculate reception” and Terry Bradshaw lofting an end zone pass to Stallworth (against the Browns). Tina and I found ourselves sitting with Jason at a table surrounded by a multitude of people who, on a Saturday non-game day, nevertheless were still in full Steelers regalia, including the servers. The food was, indeed, excellent, served on butcher paper and stacked so high it was difficult to get one’s hands, much less one’s mouth, around it. We then headed out to see other sights in the very shadow of the terrible towel. Even on a cold January Saturday, the streets were absolutely buzzing, with vendors hawking everything from skewered Chinese wings to highly uncomplimentary tee shirts prominently featuring either the Browns, Cleveland, or both.

The Pennsylvania Macaroni Company, while housed in an old warehouse, which could well be the manufacturing site for macaroni, is actually a misnomer. This Italian market is similar to Gallucci’s Italian market in Cleveland, but this market is a Gallucci’s on steroids. It is significantly larger with a greater array of everything Italian from yards and yards of butcher cases filled with imported cheeses and sausages, to the countless variety of both fresh and dried pastas. We hadn’t planned on grocery shopping, but I couldn’t resist some fresh chipotle linguine.

From Penn Mac, it was on to Wholey’s Fresh Foods, a meat and seafood market, passing on our way, the Pittsburgh Metropolitan Club which (according to the sign on the door), was closed for “staff retraining” Based upon conversation, it appeared that the retraining would be complete in three to five years at which point this club of ill repute might re-open. Wholey’s Market, reminded me much of our own Westside market, but instead of multiple vendors, there was a single purveyor, butchering everything from a “side” of Ahi Tuna, to cutting bone-in Delmonicos to spec. There were tanks of live Maine Lobsters, fresh black bass and trout, and chest after chest of frozen prepared foods. It was unfortunate that the only cooler available happened to be, you guessed it, Pittsburgh Black and Gold. Even though Wholly’s would’ve packed my fresh purchases in ice, gratis, and even though the tuna looked superb, I just couldn’t bring myself to buy a Steelers cooler.

From Wholey’s it was to the Chinese Market and then to the Penzey’s Spice Retail Outlet. At every turn there was Pittsburgh black and gold: hats, flags, stuffed animals, gloves, jerseys, baby clothes, you name it. With our accent clearly not of Pittsburgh, it was necessary that we avert our eyes and allow Jason to do the talking because, without question, we were far behind enemy lines. And as enjoyable as the day had been, as much fun as the shops and stores were, I had every reason to believe that had I been wearing my Bernie Kosar jersey, our reception might have been less hospitable; that perhaps there would have been a certain level of sarcastic derision from those clad in black and gold looking (once again) to the super bowl, as this Browns fan waited (once again) for next year. I must admit that Jason, found it amusing. Now, with the Super Bowl behind us, football won’t be back in vogue for another 5 or 6 months and at least I can revel in the fact that he hasn’t taken to rooting for the Pirates.