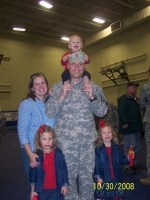 I ducked to avoid the hot, oily blast of rotorwash and walked up the ramp into the back of the last helicopter. Inside the aircraft was at half capacity, my companions buckling themselves into the red nylon seats along the wall. After the crew finished strapping down the duffel bags and rucksacks in an orderly pile in the center they, too, sat down. No one spoke, or tried to, and if we wanted to talk, the twin engines above us created such a din the only option was to put in earplugs and enjoy the ride. It was late in any case, far past midnight, and we were tired.
The engines changed pitch as the pilot lifted the ungainly machine into the air. We circled the FOB once while we gained altitude and then headed for Kirkuk, and FOB Warrior. After we left the dust on the ground behind, the crew chief lowered the tailgate and I watched the lights of Hawijah, prominent in the dark countryside, grow smaller and smaller until they disappeared. In the darkness below I imagined the routes and checkpoints, villages, sheiks, projects, operations, craters, and ghosts and watched them disappear into the night. The pilot banked around the oil fields on the outskirts of Kirkuk, dodged the exhaust vents belching orange flames and asphalt smells into the night, and turned to the airport. I could see the silhouette of our companion aircraft behind us and to one side as it followed. Then it faded into the shadows.
When we landed at the airfield it was our turn to be hustled off the aircraft. 'Grab a bag!' 'Get your ID card out!' 'Move to the bus!' We walked past the long lines of Soldiers, several days ahead of us in the process, waiting for the Air Force to take them to Kuwait, and then home. An orderly ran my ID card through a bar-code scanner and it was done. I write this as we sit in Kuwait, waiting for the flight back to Fort Drum. There are only fifty of us left, the other 600 Soldiers from our battalion are already home.
The battalion that has landed has begun to change, and over the course of the next few months we will become a different unit entirely, barely recognizable from the one that existed a few weeks ago. The stuff that makes up a unit, the daily dramas and little legends, will fade into half-remembered stories and anecdotes. What was so relevant and pressing to us on FOB McHenry is past, evaporated into the ether, gone to memory.

Collectively, we will lose about two-thirds of our Soldiers to transfers to other units or civilian life, their terms of enlistment over. We have some replacements waiting for us at Fort Drum, and the trickle of incoming personnel will become a torrent towards the end of winter. Some of our company commanders will leave and new commanders will replace them. The character of the battalion, defined by its leaders and its Soldiers, will gradually change as we rebuild ourselves in preparation for the next deployment. On an individual level, ever Soldier will have to reacquaint him- or herself with normality, and for many, with families they haven’t lived with in over a year. For some, this adjustment process will be everything they expected it to be, filled with the joys of home and the simple comforts of everyday life. A few will arrive to find their families are not there and a few others will see marriages fragment under the new strain of reunion. For the vast majority of Soldiers, the deployment will manifest itself as a positive experience. They will play with their children more, treat life less seriously after seeing it at its most serious, and take up new interests they couldn’t while deployed. For a few, things will not go well. They will not be able to adjust to an environment that lacks the structure of the deployment. They will fight with their spouses, spend too much money too fast, go home and pick up with the bad company they sought to escape by joining the Army, or bury themselves in the bottom of a bottle. Statistically, at least one Soldier will buy a motorcycle too fast and powerful to control, and end his aspirations on the side of the road.

But most of us will find new challenges to replace the old, and life will go on, and it will be all ok because no one will be shooting at us and our nights will only be interrupted by the humdrum of children, thunderstorms, and wrong numbers. A winter coat will be a fitting replacement for body armor and a pick-up truck a suitable substitute for an MRAP. We’ll take some leave, have a drink, and get back to work.


But now I have to go. I see a line forming outside by the road. Someone is calling names from the manifest. Bags are being stacked on pallets. There is a plane, waiting for us on the runway. And in a few hours, I will be home.

Read More on Notes From Iraq