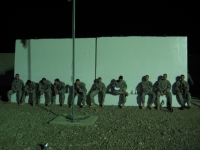 Soldiers waiting on a plane.

The Soldiers standing at the edge of the helicopter landing were in a single file beside the earthen barriers, shifting their feet back and forth, talking in low, muted tones, lit only by the faint glow of red landing lights and burning cigarettes.  Their bags were piled around them, not more than an arm-length away, looking in the midnight darkness like a random jumble of sacks, strewn in the same formation as their owners.  Other Soldiers, distinguishable by the lit chemlights hanging from their shoulders, moved back and forth, counting and recounting, checking names against the manifest.

“Ten minutes out,” The radios crackled.

"Ten minutes out!” The manifest-checkers yelled.

Conversations cut short, the queued Soldiers straightened up, dropped cigarettes onto the ground, and began to shoulder their rucksacks.  Ears strained against the autumn chill in the air, listening for the sound of the approaching aircraft.  Eyes scanned the cloudless sky, looking for shadows against the stars.

We heard the aircraft before we saw them; a mighty, rhythmic thumping like a high-octane base drummer with perfect tempo.  Two of them flew toward the landing zone in full blackout, with no lights visible, leaving only their silhouette against the sprinkled stars as visual proof of their approach.  The first helicopter flared, the pilot pulling the nose up as it descended, and the rotorwash from the twin blades stirred up a stinging sandstorm.  We all ducked behind the blast walls, turning away, the Soldiers in line falling down on their bags as if the rucksacks needed protection from the flying gravel.

When the wind subsided and we were able to look up again, the aircraft had already dropped their rear ramps and the crew chiefs were outside conducting their checks.  We could see into the dimly lit interior where other Soldiers sat packed along the fuselage walls, a mountain of their own baggage piled to the ceiling between them.  They struggled out, disoriented by the darkness, noise, and wind from the still spinning blades.  One of the guides ran forward and started yelling “New arrivals, grab a bag, any bag!  Follow the lights!  Move out!  Follow the lights,” as he gestured toward a trail of chemlites on the ground, leading into the center of the FOB.  He turned back to the waiting Soldiers.  “Chalk one outbound, get ready to load!”

Our replacements had arrived.

Our stay in Iraq is nearing its end.  And like the massive sandstorms that signaled the end of summer and beginning of autumn, our redeployment is a swirling mix of controlled energy, directed with foresight that seems to vary from months to hours in its scope.  Every single piece of equipment must be inventoried, cleaned, labeled, sorted, and packed.  Personnel have to be manifested on flights out and flights in, each manifest crafted with an attention to detail that ensures those with the right skills and rank are leaving the FOB in perfect concert with those arriving.  Mechanical failures, the weather, human error, and imperfect communications all compound to foil the best of plans.  And the enemy gets a vote.

Our little fortress in the desert has double the normal population, as the new unit arrives and we have yet to fully move out.  The line at the mess hall stretches out the door and around the corner.  The latrines run out of toilet paper soon after they are cleaned.  There are so many people in the offices and headquarters it’s difficult to walk through a room.  And every building and tent has been turned into temporary sleeping areas, including our gym.  Remarkably, there is very little conflict.  Our Soldiers, happy to see their relief here at last, know that they will soon be home.  And the new unit, relieved themselves to have finally arrived after a long period of training and preparation, is waiting patiently for us to leave so they can go about their business unfettered.

Throughout the convoys, helicopter flights, staff meetings, and inspections, our operations continue.  This week I have sat in on four contract signings for development projects, been interviewed by auditors from the Department of the Army, prepared for a visit from the Corps Commander (a three-star general), supported the construction of a new Iraqi base, all while conducting operations every night to bring in more bad guys.  The additional task of redeploying the battalion doesn’t mean relief from any of the others.  It just means I sleep less.

I’ll be among the last to leave in the battalion, as I ensure all of our equipment is accounted for and shipped properly.   In the meantime I’ll be out at the landing zone, a chemlite hanging from my shoulder, trying to make myself heard over the rotor wash.  And each aircraft that lifts itself into the night sky will bring me one step closer to coming home.

Read More on Notes From Iraq