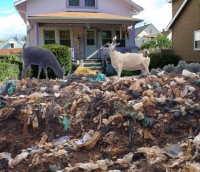 How it would work.
View Image Gallery

As a budget cutting measure, Lakewood’s City Council has passed an emergency resolution to end trash collection in Lakewood, effective April, 1st. Councilman Mike Summers, as chair of Council’s Finance Committee, has consistently made it clear that Lakewood can no longer afford business as usual. Trash removal became a target for budget cuts. He challenged the Fitzgerald administration, and fellow council members to come up with a solution.

This has also been the position of Ward 4 Councilperson, Mary Louise Madigan. She has said, "Lakewood faces huge decisions about services and infrastructure. Our budget is tight, so the Council is working with the Administration to develop a plan to lead Lakewood through the next 5 years.” Trash removal is an important part of the plan. She brainstormed with green-leaning Councilman Tom Bullock, and Councilman Kevin Butler, to come up with a plan. Their ideas have sparked heated debates that have led to a consensus among all elected and appointed officials at City Hall. They have called it the ”April First Plan”, though all parts will not be in place on April, 1st.

Council President Mike Dever has been impressed by the commitment of the entire council, Mayor Fitzgerald, and the Public Works department. This is a time of unprecedented cooperation. All that he and Mayor Fitzgerald ask is that members of the community be open, patient, and cooperative through this revolutionary suburban experiment. Councilman Brian Powers, though mostly interested in the budget savings, admits that he has also been swayed by the opportunity to capitalize on the publicity benefits of the “Green” nature of the plan.

The Lakewood Observer has reviewed the April First Plan. The publisher and editorial staff have agreed that this is the kind of advanced thinking not seen since Medieval times. “Remarkably rare thinking in this age,” said publisher Jim O’Bryan. “Steve Davis and I often discuss the traits of successful communities in terms of safe, clean, and fun. This certainly is a unique approach to clean. I just never thought they could set the plan in action by April first. I guess it is foolish to underestimate these committed people.”

HOW THE PLAN BITES AT COSTS

To reduce the costs of trash collection, residents are going to have to take a little more responsibility with their own rubbish, but they will also realize some personal savings in these trying times by not having to buy garbage cans. At-Large Councilperson Nickie J. Antonio wanted to be sure that residents realized a direct financial benefit for their participation in this plan.

Starting on the first of April, residents will no longer be required to put their trash in garbage cans. They only need to place their unbagged trash on the tree lawn for animals to eat. That’s right, animals.

After a quick study, it was found that goats and pigs are voracious eaters of solid waste. One city official remembered cartoons from his youth in which goats would eat anything, including clothes drying on a line, tin cans, and even dynamite. “Only a fool would not consider this as the perfect solution. Why pay city workers to do what animals will do for free?”
The city has issued RFP’s for a variety of animals to help with trash removal. If all goes well, there should be about 250 piglets and 47 goats on the streets of Lakewood by the end of the week.

The Lakewood Observer has been informed that piglets are cheaper than full sized hogs. Their metabolism is higher, so they eat a lot more. As they consume more and more garbage, like food scraps, they grow and grow until they are ready to be sold at market, again adding to the city’s coffers. Some would, of course, breed and continue the program without using more taxpayer dollars. Goats fill the gap by eating non-food items. Raccoons, birds, and rodents that are native to Lakewood will also serve as unpaid trash removers.

Just as they do with autumn leaves, residents will be asked to rake their rubbish into neat piles by the curb as part of their responsibility. Lakewood Police and the Municipal court are still ironing out enforcement details. They ask that residents not fool around and violate the April First Plan, and also to be careful driving near animals.

Jim O’Bryan, a known skeptic of regionalism, wants to make sure that CLE+ does not mean that we share our livestock with Cleveland and Rocky River. “I know they’ll want a percentage of our livestock. I want to be sure that what happens in Lakewood stays in Lakewood.” Mayor, Ed Fitzgerald has made it clear that invisible fencing wires will be installed at city boundaries from Highland Avenue to the Emerald Canyon. The livestock will wear shock collars. He assured this writer that they are indeed humane, protect the animals, and our investment. P.E.T.A. will monitor animal safety.

Budget cutting by replacing humans with animals may be a continuing trend. Lakewood officials are looking into mowing grass on park and school property with sheep. The city may save on chlorine bills by placing sterilized Chinese Grass Carp into swimming pools to eat organic matter.

The consensus at City Hall is that it would be foolhardy not to expand the April First Plan.