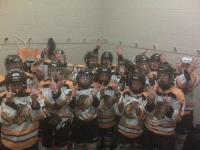 Colin's Hockey team holding his #14 on their hands

I tortured Colin this morning. After OT he wanted to get right back into bed, but I wouldn’t let him. I came up with excuse after excuse to keep him up in his wheelchair. We played a couple games of Trouble. He won both games – we won’t tell him that I let a few of his counting mistakes slip by. I got him to eat lunch at the group tables, which is another thing he doesn’t want to do. Then Aunt Annie and Kyle came by for a visit. Kyle brought a joke book that got Colin giggling, and Kyle shared a new talent. He has a very interesting way of playing “Hot Cross Buns” on the recorder – it wasn’t with his mouth! Colin was quite impressed.

During PT Colin worked on balancing in a sitting position. I held a bean bag and he had to reach for it (across his body, above his head, on the ground, etc.) and return to center. Naomi helped of course, but it was a tiring work out.

In my forceful mood, I bargained with Colin during Speech and Language Therapy. I was only going to stay with him for half of the session. He was to do the second half alone. He was hesitant, but he did it. When he joined me later he said, “Mom” and “I am eleven”. I was quite touched. Lisa is already doing amazing work with him. She has him humming, and tapping and goodness only knows what other tricks she has up her sleeves. Whatever the method – I am truly amazed.

Lisa also gave Colin a talking keyboard to try out. He types a word and the machine speaks it for him. It’s pretty cool. He can only do one word and short phrases at a time, but it’s still cool.

The Gerard’s stopped by with some computer games – fun! They also gave him some tomahawk stickers and decorated his helmet even more. I have to admit it does look pretty cool.

Mrs. Beachler, Colin’s teacher, also came by this evening. Colin had a huge smile on his face when he saw her. She brought a school project along to show Colin, and lots and lots of cards.

The Hospital has changed their policy on Colin for the time being. The list we handed in was rather large and we were adding names on a regular basis. They have made Colin's visitor log open. You will not need to contact us to be added to a list. If you have any problems with getting in to see Colin, my cell is 440-724-7293, call and I will get you clearance.