A Tree Grows in Lakewood 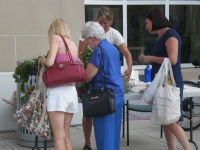 Lakewood Earth and Food (or LEAF) is, in the literal sense of the word, a grass-roots organization. In fact, this year’s slogan says it all: “Planting the seeds that change a city into a community.”

And while many Lakewoodites have most likely heard the name, read something about them, or seen them march in the 4th of July parade, LEAF is actually a great deal more complex than its most publicized Community Garden project. In addition to Community Gardening, LEAF supplies affordable produce on a weekly basis, brings in vendors who sell bulk, and tries to reuse waste materials.

Despite success in its first official year, the organization had a rocky start. During Mayor Tom George’s administration, several current LEAF Board members approached the mayor about the possibility of community gardening, but were unsuccessful in getting a definitive or a supportive response. So they continued to work on their own.

“There were various people trying to do projects involving city support,” said Chris Trapp, the treasurer of the LEAF Board. “We ended up with a group really into it, with all sorts of ideas.”

“Initially, we decided to focus on only a few goals with the overriding concept that this kind of group could really bring a community together and make the city a more attractive place to live.”

When Edward FitzGerald came into office his administration offered its support and even went above and beyond what LEAF could have expected by tilling the soil, transporting humus, and getting water to the sites.

“This administration is more receptive to these ideas,” said Trapp. “They are more responsive to what people want to do.”

The city tilled the land and helped get the gardens up and running in order to help offset LEAF’s late season start. Currently, there are 65 individuals gardening, with at least 130 plots, a statistic that “exceeded expectations”.

Plots can be purchased for $25 for the entire season and Trapp said that he expects that the plots available at Webb, Madison, and Cove Parks, and Plover Gardens will be filled next year. “It will be interesting to see how each garden develops its own personality,” said Trapp of different gardening techniques and their impact.

“I would like to see 100% capacity next year,” said Amy Bennett, the Community Garden coordinator and ESL teacher at Horace Mane Elementary. “I worked with the 4th grade to get a plot in Webb. I hope we can make a close bond between schools and community gardens. I would like to see schools near gardens work on them.”

The benefit of these gardens is that they provide a great deal of produce, so gardeners get more than their money’s worth. One plot produced 5 pounds of beets in a short period of time. LEAF also believes that the gardening process, among other things, can bring a community together.

As for expansion, he added that there are several other locations in Lakewood - both city and privately owned - that are possible candidates for the Community Garden projects.

“We want to improve people’s access to good food,” said Annie Stahlheber, a member of the LEAF Board in charge of the Community Support of Agriculture (CSA) program.

Stahlheber, who works for the Board of Health and is a dietitian, is a passionate advocate for fresh, local food. So, in 2007, she looked into a program called City Fresh, which helps provide good quality food to low income patrons.

The LEAF Board, which was already familiar with City Fresh, decided in the winter of 2007 to create a “fresh stop” in Lakewood. Stahlheber was given the control over this project and throughout the next season, participation in the program grew rapidly, mostly by word of mouth.

“There is so much interest in this community, it’s crazy,” said Stahlheber.

Aside from volunteering for City Fresh, people can receive a share (or half share) of food each week at a reduced price. The “shareholders” pay from week to week and get a portion of each of the different produce. Stahlheber estimates that there are at least 300 people a week receiving food through both City Fresh and another Community Supported Agriculture program Covered Bridge.

Covered Bridge Gardens is a conventional, family-owned and operated farm out of Ashtabula, whoses owners, Mick and Kay Prochko, deliver their produce in person during each LEAF Night.

“It’s rewarding to see this program take off like this,” she said. The food is picked within 24 hours and delivered directly to Lakewood. All of this fresh, local produce originates within 75 miles of the Cleveland area. “It helps economically and environmentally. By keeping the money in the local economy, it helps the community improve itself.”

She added that some of the other benefits of a program where shareholders receive local foods are that it supports local farmers, who normally don’t get great prices when they sell in bulk to grocery stores.

Also, the truck that delivers City Fresh produce to the Urban Community School in Ohio City, where it is picked up by volunteers, is run on Veggie Oil.

LEAF Night
Probably the most visible vestige of LEAF’s ever growing presence in Lakewood is LEAF Night. Held every Thursday in front of the Lakewood Public Library, it is a chance for shareholders to pick up their produce, buy more goods from vendors, or barter for their preferred veggie. Art and entertainment are also provided. On the most recent session, the two featured artists were musician Joe Landes and painter Kris Williams.

“This is my first time selling at LEAF,” said Williams, a half-share holder who specializes in painting big and little animals, although the favorite at her home are fat, round birds. “Everyone gets a turn.”

But the main event is the queue for fresh produce. “I like it,” said Danielle Masters, a shareholder who was at LEAF Night with her children. “The kids get good produce and they know it comes from a farm.”

There was everything locally grown from basil to dill to zucchini to squash to potatoes to bok choy just to name a few. Occasionally, there are berries, which seem to be a favorite.

“I love when there are berries,” said Masters.

“The berries last week were awesome,” said Williams of what she thinks were giant blackberries.

But not every vegetable is to everyone’s liking, which is why LEAF provides a Barter Table. “Whatever you get in your share, you can trade one for one,” said Amy Bennett, a LEAF Board member who was working at the Barter Table. “Some people kick it up a notch and bring in extra from their garden for community consumption. What can you do with [5 pounds of radish]?”

Bennett said she loves to work the Barter Table because she gets to talk to people and get all their recipes as they trade food.

“I’m going to write them down and publish them in the newsletter,” she said enthusiastically. “I almost wish I had a camera because they are so animated and passionate about their recipes.”

“We tend to take on something new each year,” said Lynn Rodemann, the head of Madison Gardens, LEAF Bulk Buying and a LEAF Board member. “Our goal next year is a giant industrial compost site, so we could turn it over and work with our gardens.”

Rodemann’s own Bulk Buying program is still being developed. For one of the LEAF Nights, she was able to secure one vendor who sold in bulk, and hopes she will be able to return.

“I am in hunt of vendors to come and sell flour and locally grown goods,” said Rodemann. The bulk vendor who did come had cornmeal, honey, oats, and split peas.

“She seemed pretty popular,” Rodemann commented who added that she is looking for people to come and sell winter items like dried fruits, cheese and milk.

The last leg of LEAF is titled Earth Building and is concerned with soil composting, water collection, and a healthy environment. While this part of the organization is still being defined, the reuse of materials is a major factor in its development.

“Now people are recognizing LEAF,” said Trapp. “It’s just making people aware of the ‘green’ movement and being mindful of how we’re doing things. With energy costs the way they are, we don’t want to be dependant on food coming from California or Chile. It’d be good to create energy resources out of waste.”

He continued to say that there is room for people with other ideas not necessarily related to food to hook up with LEAF as long as these ideas are at least loosely tied to sustainability.

“It’s better than going on your own,” said Trapp while dropping that some ideas he thought would be helpful were solar power and biodiesel fuel. “We need to be as close to the community as possible.”

“We have a lot of potential,” said Bennett about further growth of the program.

“We’re building a community,” said Dan Slife, the President of the LEAF Board. “We’re bringing people together for a healthy cause.”

In fact, most involved with LEAF will echo those same sentiments.

“I really enjoy meeting people at LEAF night,” said Rob Burgoyne, Vice President of the LEAF Board. “It’s a great celebration of food…we’re building this community in Lakewood around food.”

“Food brings people together,” added Bennett. “I’ve met people and fostered relationships with people who I wouldn’t normally have a relationship with.”

After just a few minutes at LEAF Night, it does become clear that people come not only for the food, but to see friends and socialize.

“I feel as if I’ve seen every face in my community,” said Rodemann. “It’s amazing how food can bring people out of their houses and turn it into a community event.”

“I personally know many more people in the community,” said Trapp. “It illuminates that there are a lot of people around who are concerned about the city and the environment… the more people the more power you have.”

But the biggest lesson, as Stahlheber put it, is how great, friendly, and helpful the community is. She’s seen other communities try to do this kind of program, and the results have not been as impressive.

“It’s really a miracle that this happened,” said Slife. “127 plots and four city gardens in one and a half months, that must be some sort of record.”

Lakewood Renaissance is a series of articles that focuses on the efforts of citizens and grass-roots organizations toward improving the community we live in. Each story will feature one of these organizations that has made a significant impact on Lakewood. If you have any comments, questions, or suggestions for future stories, please send them to lakewoodrenaissance@lakewoodobeserver.com.