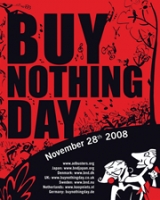 Though many are unaware of its existence, there is another sort of holiday coming up (though, depending on when you have picked up this issue, it may also just have passed): Buy Nothing Day. Though its origins lie in Canada and the day is most heavily promoted through Adbusters magazine, a Canadian social-activist and anti-consumerist publication, it has developed into an international movement, with participants in more than 50 countries. In the US, Buy Nothing Day is slated for the day after Thanksgiving, which in recent times has been labeled "Black Friday," the day when hordes of consumers rush out to malls to purchase goods at steep discounts. For the rest of the world, which generally lacks such a day, it is the Saturday afterwards.

Though our economy has its difficulties, and buying nothing is not exactly what the economic doctors have ordered, the world around us may feel differently. The average American consumes more than anyone else in the world. According to an Adbusters' ad, the average North American consumes ten times that of a Chinese citizen, and thirty times more than an Indian citizen. As China and India have been developing quickly of late, one can only imagine what this ratio would be had they used a poorer country, like Haiti, Rwanda, or Bangladesh. And while it is wonderful that American citizens can purchase goods from anywhere at anytime, we have all been made familiar with the statistic that this lifestyle contributes more than anyone else's to global warming.

Meanwhile, economic indicators do not take important environmental issues into account. Gross Domestic Product (GDP), a statistic used widely to compare economies, does not properly account for the degradation of the environment. Clear-cutting forests to make timber or paper products increases the GDP, as companies sell the labor to cut the trees, then profit on the processing and the final sales. An oil spill or other toxic waste cleanup increases the GDP, as companies are paid to clean it up. Industries that pollute the air contribute to the GDP. And, so do the medical costs of those made ill by pollution.

Of course, there is no easy fix to such issues, but as global warming becomes a more imminent threat, they must be addressed somehow. And, though political action will be needed to truly solve the majority of environmental issues, there is no limit to what individuals can accomplish through grassroots movements, like this one. Rather than hurting business, in the end this type of movement will suppport those businesses who operate soundly - those who create good products in a safe way, without exploiting the environment or workers.

While buying nothing for a single day may seem an overly simple task, I cannot count the number of days where I would think that I had purchased nothing, but then recall the odd random want or need that I did, in fact, decide to fulfill - a pack of gum, a midday snack, a meal out rather than at home, that pair of earmuffs or cheap gloves to deal with the sudden onset of cold weather, etc. But, with focus, the task is also not a difficult one.

And, yes, there is the theory that you may just go out and buy the same goods tomorrow even though you didn't shop today. This is true. But, the spirit of Buy Nothing Day is not really about one particular day, but about thinking outside of our consumer box. Rather, the idea behind Buy Nothing Day is to commit to a lifestyle of less consumption (and, equally importantly, intelligent consumption) and, consequently, less waste. The proponents of the day hope that, in addition to staying home on November 28th, you will be led to celebrate Christmas differently, and, then, make a New Year's Resolution (and, yes, ideally, even keep it) to change your lifestyle in 2009 and beyond.

Even if your celebration is small and doesn't extend past your immediate family, at least you have saved that much waste, and that much money. And whatever you do do on Buy Nothing Day is likely to be much more fun than hitting the stores would have been.

So, why not spend a day without spending?