Feasting In The Great Outdoors 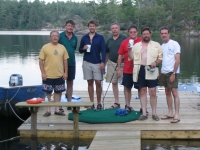 There is something to be said of getting away from your everyday existence; something to be said of taking a vacation from the daily grind. I’ve always enjoyed the prospect of being removed from the everyday trappings of society as we know it. No phone, no internet, no electricity. In Communicado for a week. And so it was, for an all too brief period, I once again found myself driving northward, past Toronto, past Barrie, beyond Parry, to an access point to the French River, just off highway 69. Claude’s French River trading post is more a marina that services the scores of sportsmen that fish the French. Doubtless that the trading posts in “Last of the Mohicans” didn’t sell or service Evinrude outboards. It is a journey I’ve made a number of times before, one that holds the promise of quiet, good company, exploration and great food.

Some may consider motoring upstream for an hour to a small red cabin with only a propane refrigerator as roughing it. Indeed, columnist Michael Heaton, from the Cleveland Plain Dealer had likened the trip to a cross between “Deliverance” and "Apocalypse Now,” neither of which is an appropriate parallel. The fresh pine forest that engulfs the bays and islands of the French bears no resemblance to the hardwood forest canyon that provided the backdrop for “Deliverance” and certainly the clear cool, deep waters of the French beyond being water, have no similarity to the muddy swamps of the Mekong depicted in “Apocalypse.” I’ve done canoe trips that were roughing it; been places where nature could deliver a cruel “wake up call.” Compared to those, this was living in the lap of luxury. As the woods and the river were food for the spirit, the coolers in the bottoms of our rented boats contained more than ample sustenance for the body.

What was interesting, in an ironic way, was that our destination was the very same as Heaton’s. But, our most dicey experience was preparing the herbs and chilies for the “Mexican night” salsas and quesadillas. Running the rapids in a bathing suit and life jacket could only serve to enhance our appetites, both for the offerings of nature’s own water park as well as the food to be enjoyed. While we could have relied on the fishing skills of the group for that sustenance, our preference was to catch and release, as we did with a good number of Large mouth bass and pike. Better to enjoy that which we had brought with us and let them swim in those pristine waters for another day.

And so for a week, we swam, we paddled canoes, we hiked far off trails, we fished. And we ate. Lord how we ate. The aforementioned “Mexican night” with freshly made chips, guacamole, salsa and tequila with lime slices and grilled chicken quesadillas. There was some pretty fine blackened shrimp and a platter heaped high with racks of smoked baby backs, slathered in spicy barbeque. Fresh salads, red beans and rice, grilled marinated pork tenderloin and freshly baked toll house cookies. Personal omelets boiled in a bag, BLTs and grilled Ruebens. As one of our group commented, “We eat better up here than I do at home.” And while I’m pretty sure Gary was referring to the meal of London broil and roasted potatoes we had just finished, having spent time just a few hours earlier watching as the mother Osprey caught fish to feed her hatchling in the nest atop of the wind-bowed white pine, or watching the pair of beavers as they eyed us floating past, before disappearing with a slap of their tails, had provided similar fare for the soul.

With the only artificial light for miles being a propane-fueled flame in a small fixture over the dinner table, it gets very dark at that cabin. And then the stars come out. Stars the like of which you can only see away from the light pollution of civilization. So numerous that it would almost appear that the Milky Way is a cloud, with imagined movement, enveloping the Big Dipper. The peaceful silence is broken only by the soft lapping of the bay on the smooth rocks, the haunting call of a loon and the distant howl of a wolf. Spirits regenerated by the beauty of the surroundings, appetites sated by “the best dinner ever,” the group adjourned to the cabin. There were cards to be played, conversation and discussion to be had. Oh, and there was buttered popcorn. More than enough to eat, both for the stomach and the spirit.

This is best done in the fashion of a salad bar. Prepare favorite ingredients for omelets, in separate bowls: grated cheese, crumbled bacon, diced ham, minced onions, peppers…whatever you want.

Fill a large pan with water, bring to a rolling boil.

Each individual omelet requires a large (quart) zip-lock bag (labeled for its user). Break two eggs into the bag, seal it and mix well. Open the bag and add your choice of ingredients. Seal and mix to combine. Once everyone has created their omelet, make sure the bags are well sealed and place them in the boiling water. DO NOT reduce heat, cook for 13 minutes.

The omelet will slide out of the bag unto your plate. A neat way to feed a breakfast crowd!