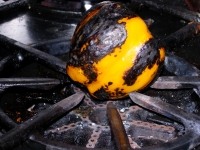 A yellow bell pepper begins to blacken as it is roasted
View Image Gallery
There are times that we experience a “new” food or “new” technique for the first time, but, in reality, we have probably already eaten it without recognizing it as a “new” or gourmet food product. One such trend is “fire-roasted” vegetables and we see it everywhere from gourmet restaurants to the specialty aisle of the grocery store. Roasted garlic, tomatoes, and peppers are now found virtually everywhere. When roasted, garlic becomes sweeter with nut-like overtones. Peppers mellow and, in the process of roasting, lose the skin that can sometimes cause bitterness. Tomatoes lose some of their acidity, but gain a slight element of smokiness. But, while fire-roasted vegetables may seem as if they are on the cutting edge of culinary developments, that is far from reality. It’s likely that you’ve been enjoying those fire-roasted vegetables with no thought, perhaps for many years. What seems “new” is really something your palate already knew.

If you think that gourmet “fire-roasted” tomato soup is an innovation, you’ve probably overlooked the tomatoes that were strung on your shish kebabs. And, those fire-roasted peppers that now appear on sandwiches and in salads, while not a bell pepper, are prepared in the exact same fashion as the pimentos that are stuffed in to green olives. So, what is it that raises these “new” items to the level of gourmet specialty? Price alone may explain the difference between pedestrian and gourmet, as certainly a small jar of roasted peppers or roasted garlic can be rather expensive. Perhaps it is the mystique, something far more basic that “fire-roasting” awakens in our primordial senses. But, whatever the reason, the reality is simply that fire roasting is the most basic, hence easiest, cooking technique, which allows you to produce these “gourmet” ingredients for your cutting-edge recipes at a fraction of market cost.

As part of my recent experiment with vegetarianism, I recognized the need to have some gourmet ingredients available for different recipes. Roasting the necessary peppers was far easier and more cost-effective than you might imagine. It was also much less time-consuming than removing all those pimentos from the olives.

As a base for a roasted red pepper sauce that would accompany some gnocchi with a julienne of roasted yellow peppers, I needed to only invest a few minutes in the process of fire-roasting the aforementioned peppers. As I said, the technique is simple.

Place a pepper directly on a gas burner turned to high. Turn occasionally until the skin has been evenly charred black. Then, place the pepper in a paper bag, close the top, and allow it to “steep” until cool. In following this procedure, all that you’ve really charred is the outer “skin” of the pepper. The flesh, although it softens as the pepper cools, is unburned, although a certain flavor enhancement - a little smokiness - is imparted as it steeps in the bag.

But, now you need to get rid of all that blackened char. If you think that the skin of a bell pepper can be a bit bitter, being burned certainly does not subdue it. Fortunately, the steeping process loosens the skin and allows it to be easily rubbed away. The classic technique is to do so WITHOUT rinsing, primarily because you don’t want to wash away the vital oils and adding water is not conducive to the traditional storage of the roasted peppers in olive oil. Once the char is removed, simply core the pepper, remove the seedpod, and slice into thick wedges. The roasted peppers can be stored, refrigerated, coated in olive oil. And, if you’ve decided to rinse off the char, despite my warning to the contrary, all is not lost. Just make sure that you thoroughly dry your roasted peppers by blotting completely between several layers of paper towels. Repeat until the flesh is no longer damp. Add the roasted peppers to a salad, use them as a sandwich topper, or make a roasted red pepper sauce by pureeing with several cloves of garlic, a little salt and pepper, and then slowly add olive oil to the running food processor until the mixture thickens. Then, as I will do, serve it with some fresh gnocchi, a crusty baguette, a mixed salad, and a glass of Merlot.
Read More on Chef Geoff