Cheesburger in Paradise: The search for the Great Lakewood Lunch Burger 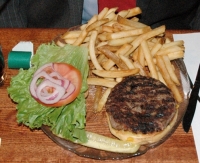 Around The Corner, Burger and fries.
View Image Gallery
The endeavor started out innocently enough. A couple of friends, the need to meet to discuss some pressing issues, and a lack of free time. The first question that arose seemed simple enough: "So, where do you want to eat?" But the apparent answer, "Let's just grab a burger" created a plethora of issues. Pretty much any lunch joint serves a burger and there was little agreement on where to eat ours. And so was born the need to search out the most satisfying burger in the 'Wood.

The three of us had little idea, initially, of the historical implications of the endeavor. The hamburger, although readily available, is anything but "common". No, the hamburger has a long and storied history, going back centuries. It is generally accepted that the hamburger descended from the German city by the same name, which may be an accurate assumption, given the unique round shaped Rundstuck warm, circular sandwiches popular there, and the development of using ground meat scraps in a Brotchen sandwich. But, as early as the Mongol conquest of Russia in 1209, the horde was eating tenderized meat, "ground", as it were, by carry it in the saddle as the horses galloped over the steppes. This became known as steak tartar, and later, hamburger steak.

The "modern" hamburger is thought to have evolved when, in 1885, Charlie Nagreen found that his fried meatballs were not selling well at a Wisconsin fair. To make them easier to eat while walking, he flattened them, and he placed the squashed meatball between two slices of bread. The all important bun is thought to be the brain child of Walter Anderson, whose invention went on to fuel the formation of White Castle in 1921. During WWI, with rising anti-German sentiment, the hamburger was rechristened "Salisbury steak", a dish that took its own course of culinary evolution. But, the burger never really looked back, and by the late forties, with the founding of McDonald's, its place in our national culinary lexicon was assured. And so, with a deep appreciation of the its celebrated past, we undertook our quest. The first order of business was to set our guidelines: What is it that makes a good (or, be still my carnivorous heart), a GREAT burger?

Of course, a primary concern is the meat. A good burger simply must have a juicy meat patty, preferably hand formed, so as not to be too tightly packed. The bun too, is important, and freshness plays a large part. Extra points must be given for a burger that is nestled in a homemade bun. No burger is complete without condiments, and their availability and quality impacts on the entire burger experience. Lastly, but of no small importance, are the accompaniments which find their way to the plate. Is the tomato fresh, onion plentiful, fries crispy and pickle crunchy? And, of course, is the preparation as requested, with an attentive server. All must combine in order to reach burger nirvana.

We chose the restaurants in a fairly random method (which may require that we revisit the quest in the future). Clearly the restaurant needed to be open for lunch. And given the shear numbers available, we determined to spread out the search geographically and refrain from the standard franchises. In the end, we found ourselves enjoying lunch at Around the Corner, the West End Tavern and Rush Inn in western Lakewood, the Place to Be in central Lakewood, and the Lakewood Tavern and Coffee Pot in eastern Lakewood. There are certainly others, but for this initial inquiry, here are our findings, in no particular order.

Around the Corner, 18616 Detroit, is a popular gathering place, although during our lunch visit, the usual nighttime crowd was absent. ATC has a large and devoted following for what many feel are the best Buffalo wings on the west side of Cleveland. It also boasts a wonderful outdoor patio that belies the fact that you're enjoying a cold beer near the Rocky River, and not Hilton Head. ATC features a large, half pound "black angus" burger, charbroiled, served on a toasted Orlando Kaiser roll. We found that the meat patty was not hand formed, a bit dry, and tightly packed. It was cooked to order, and served with lettuce and a minimal amount of red onion shavings. Good quality fries brought the cost of the lunch to $6.95, with standard Heinz ketchup and French's mustard at the table. The bleu cheese addition was excellent. Service during our lunch was inexplicably slow, given the small number of customers. But, over all, ATC produces a credible bar burger, if not one which is particularly memorable.

One of our triumvirate is a fan of the Place to Be, in the center of downtown Lakewood at 1391 Warren Road. The Place to Be attracts a large downtown clientele both for breakfast and lunch. The friendly servers know many of the customers by name, and even though not a "diner" in the true sense of the word, it has that type of feel. The Place to Be fries their commercially made patties, to a uniform well-done and serves them up on what is a Millbrook-esque bun. Condiments, while not present on the table, were graciously offered by the attentive server. While the lettuce, tomato and pickle accompaniments were not notable, the deluxe burger at $4.49 comes with fries and coleslaw. The fries were excellent, and the coleslaw very good, and for the price, the Place to Be represents a good luncheon location.

Traveling to the east side of the city, we continued our quest at the Lakewood Village Tavern, 13437 Madison. The "Village" is what you would expect from the friendly neighborhood bar, complete with the requisite arcade bowling machine. It is inviting in a "Cheers" kind of way, with an attentive, friendly barmaid doing double duty as a waitress. Our large, Â½ pound burger was a bit overcooked and came on an oversized toasted sesame seed bun. The bun wasn't as fresh as we would have liked, and the steak fries were a bit dry. There is A-1, malt vinegar, Worchester, in addition to the standard ketchup and mustard at the table, and the server will happily see that additions such as onion, lettuce and tomato are available. At $ 4.75, we felt that the "Village" offered a great value. As an aside, we also ended up at the "Village" in the evening and found that the $6.95 strip steak might be an even better choice for overall value.

The West End Tavern, 18514 Detroit, has always been a favorite of mine, particularly for the excellent clam chowder served on Fridays. Many Lakewoodites swear by the Sunday brunch, with a "make your own" Bloody Mary bar. West End serves a hand formed Â½ pound "black angus" burger, char grilled to order ($6.95). A smaller burger, the wimpy, is also available.. We could have done without the kitchen's addition of salt and pepper to the ground meat, preferring to add our own to taste. A large, chewy, toasted, bun appeared the closest to home made, and the menu gives credit to Cleveland's Mazzone's bakery. Standard mustard and ketchup were at the table, but the lettuce accompaniment was sparse, the tomato added only color, and the pickle was disappointingly commercial. The West End serves fries which are coated, and even so were largely tasteless. Service was attentive and friendly and all in all, while the burger is not spectacular, it is good, and the West End is a popular lunch spot where many of Lakewood's movers and shakers can be found at lunch.

Just across from the Beck Center, and an appealing spot prior to attending one of the performances there, is the Rush Inn, 17800 Detroit. Even though there was a large crowd present on our visit to this popular spot, the service was prompt and friendly. The large burger was very fresh and we all felt that the meat used was of excellent quality, quite flavorful and juicy. It was unfortunate that the quality of the meat in our burgers suffered from being somewhat overcooked. While I am a fan of an onion hamburger roll, one of our group was not, and found himself removing the offending veggie from the Orlando bakery product. The $6.95 burger in accompanied by acceptable fries, but necessary condiments were absent from the table, and a special request had to made for standard mustard and ketchup, as well as napkins.

If you didn't know that the Coffee Pot restaurant was in the little store front at 12415 Madison Ave. there would be nothing to give away the secret. This small lunch counter/dining room only seats 20 or so people, but those seats are mostly filled with long time regulars who are a first name basis with the friendly staff. The limited menu is supplemented by some daily specials, reminiscent, of the old "blue plate specials" one used to find at every similar lunch counter. The fresh but commercially made hamburger patty was fried well-done, and served on a standard hamburger bun. Nothing special there, but, to our surprise, not only were we offered a choice of toasted or non-toasted bun, but were also offered the option of grilled or raw onions as well as mayo, the standard lettuce, tomato and dill pickle (slices). The standard condiments were present at the table, and the fries a bit overcooked, but very plentiful. For under $4.00, this little hole in the wall probably represents the biggest bang for your Lakewood Lunchtime burger dollar.

Our search for that special burger, the one that you would go out of your way for, has been illusive. We've found that from the spots we've visited, that there's some decent "bar" burgers to be had in the 'Wood and some really good values. Call me a romantic, but I'm certain that we will still discover the burger that transcends merely good, or a good value, but will rise to the level of burger greatness. There are a good many other lunch burgers to sample, and so this is a work in progress, which will hopefully be supplemented when we once again have a taste for a grilled patty of hand formed, coarsely ground fresh beef, cooked to order on a fresh roll. But, for right now, the three of us are on salads for awhile.