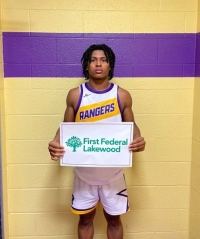 Senior Hakeem Quaran, the First-Federal Lakewood Player of the Game, led all scorers with 21 points.

After opening the season with three tough road losses against elite opponents, the Lakewood Rangers led wire to wire and defeated Normandy 44-41 in our home opener.

Senior Hakeem Quaran (the First-Federal Lakewood Player of the Game) led all scorers with 21 points, using the 3 point shot and strong drives to great effect. Senior M.J. Grayer scored a modest 3 points, but was a force on the boards, somewhat neutralizing Normandy's significant size advantage.

Yet, within this senior dominated line-up, the key play of the game came from sophomore Drew Jablonowski (9 points). After storming out to an early 14 point lead keyed by intense team defense, the Rangers went cold, and Normandy closed to within 2 with 5:54 left in the game. All the momentum was with the visitors. But then, Jablonowski cooly knock down a corner 3-pointer—followed by a Quran 3—to repel the Invader surge, and the Rangers were on their way.

Hats off to Coach Alex Cammock and all the guys from 44107 for this team victory.

The Lakewood bench was superb—there was no drop off in play when substitutes entered. Junior Aya McAuliffe hit a couple of 3's and had a solid all around game. Junior Annette Doren didn't score, but played strong defense and handled the ball well. Junior Brigid McKenna played tenacious defense and scored on a driving layup.

But after Hendrickson, the Rangers most valuable player tonight was Jacquie Hudak (7 points), who hit a key 3 pointer to stem a Tiger rally, snagged several key rebounds, and was, as usual, an aggressive pest on defense.   Every Ranger played with heart and an unselfish attitude tonight. Great effort by the squad from 44107