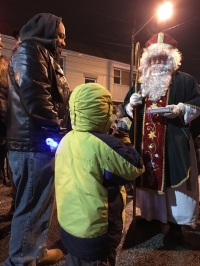 St. Nicholas (aka Reverend Sean Templeton) has been a favorite among Light Up Lakewood visitors.

An Anglican Christian congregation that has been part of the Lakewood community since 2014 was officially welcomed into the Anglican Church of North America (ANCA) Diocese of the Great Lakes on November 5 with joyful celebration. At a recent service the Rt. Rev. Mark Engel, bishop of this area, initially recognized this historic milestone and confirmed ten new members. Formerly known as Lakewood Anglican Mission, the congregation is rapidly growing and has a new name: St. Anselm Anglican Church.

St. Anselm is now an official parish (a fully functioning congregation) in the ACNA, an important milestone in the life of the church. "This is a historic day as God has brought a congregation of 100 from a small group of seven" said the Reverend Sean S. Templeton, who is the vicar at St. Anselm and has led this flock as its priest since its beginnings as a small house church in 2013. "From the beginning we have made Psalm 127 our focus, ‘Unless the Lord builds the house the laborers labor in vain.’ God has built it and we praise Him for it!" Father Sean will be installed as rector (head pastor of a parish) along with the vestry at St. Anselm’s parish dedication on February 20, 2022.

The congregation worships in Gethsemane Lutheran Church at 14560 Madison Avenue.

What is the Anglican Church?

St. Anselm is a part of the ancient Anglican tradition. Anglicanism is a worldwide body of Christians responding to God’s revelation through Jesus Christ. Anglicanism brings together the authority of the Bible, the historic faith, and the beauty of structured prayer. It is rooted in tradition, yet contemporary in practice. Globally, Anglicans form the third-largest body of Christians in the world (around 80 million members) behind the Roman Catholic and Eastern Orthodox churches.

The name “Anglican” is traced back to the ancient Anglo-Saxon tribes of Europe. The tribal name was spelled “Engles” or “Angles” and the tribe’s speech was the precursor to the English language. Their island became known as England, and their Christians were known as Anglicans. While Christians from Britain, the United States, Canada, and Australia continue to play an important role, the Anglican Communion is strongest in the global south. Today the “average” Anglican is a young woman from Sub-Saharan Africa.

St. Anselm Anglican Church aspires to be a hope-filled community that welcomes all to join in the worship of God and in the reconciliation of all people to God, to the city, and to one another. The congregation invites all to seek Jesus with them through the teaching of God's Word, the beauty of the Anglican liturgy, and the breaking of bread.

Who was St. Anselm?

A monk and later an archbishop in the English Church, St. Anselm of Canterbury lived c. 1033 to 1109. He was a champion of the rights and freedoms of the English Church in relation to the crown. A scholar, his was an intellectual Christianity, a “faith seeking understanding.” He wrote, “I do not seek to understand that I may believe, but I believe in order that I may understand. For this, too, I believe, that unless I first believe, I shall not understand.” This understanding of the relationship of faith and knowledge influenced many late 20th century theologians and philosophers of religion and science.

"It is fitting that our church take on this saint's name," said Fr. Sean. "St. Anselm is a great patron. He was a strong guardian of the Church in a challenging political era, a pillar of western thought and Christian philosophy, and an advocate for education. He was a principled and winsome person.”

What's next for St. Anselm Church?

The church is looking forward to the upcoming Advent season, which anticipates the incarnation of Christ at Christmas. The congregation has traditionally been an important and beloved part of Light Up Lakewood, which is on Saturday, December 4th this year. The church gives out free cups of hot chocolate in front of the Masonic temple, in the heart of the event. In past years, more than 2,000 attendees have enjoyed cups of hot chocolate along with an invitation to come and worship thanks to St. Anselm volunteers.

St. Nicholas, in traditional costume, makes an appearance at the St. Anselm hot chocolate booth each year and is available for photos.

The church will have a candlelit Christmas Eve service at 4 pm on December 24. During Advent, the weeks leading up to Christmas, Sunday services are held at 11:15 am, with Sunday School for adults and children at 9:30 am. “All are welcome,” said Reverend Templeton. "In our worship, we join with Christians who have worshipped this way since AD 165. Together we praise and adore, listen, ask for ourselves, intercede on behalf of others, confess, and are fed and blessed by God. Join us!"

Susan C. Olmstead is a local writer and editor and a member of St. Anselm Anglican Church.

Susan C. Olmstead is a local writer and editor and a member of St. Anselm Anglican Church.