How I Became A Traveler 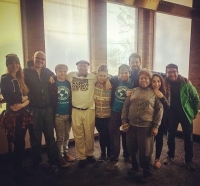 My name is Fernanda, and you may have seen me around Lakewood. I fit right in, but I wasn’t always such a world traveler. Just a few years back, I was just living my normal life in Chile.

I was 24 when I went on my second trip to Brazil, and I did not know how that first experience speaking another language was just the beginning of an awakening passion about new cultures.

The most interesting thing for me about Brazil was the favelas, I knew that to get in there you should ask somebody who lives there to get the chance to be there.

I was staying in a hostel and I meet a Brazilian guy called Yuri, he is a street artist, and he was doing a mural there, so he brought me there! I spent 2 weeks visiting them every day, playing with the children, making food with the women and painting murals with him.

I did not speak Portuguese at that time, but it's similar to Spanish and it wasn’t that hard to understand what they were saying…

It was a very important experience for opening my mind and getting curious about cultures, other places and other languages.

I was growing my career as an engineer, having a good life, good friends, and an amazing family, but something was missing for me.

I was feeling that all I have done in my life was to make my family proud of me. I realized that was my moment to do whatever makes me happy.

And then I remembered when I was child, I liked to watch these documentaries on TV on Sundays where they showed people traveling around to different interesting places, living like the other cultures and sharing with them as one of them. I always wanted to be in these documentaries because the travelers seemed very happy and surprised about how they were living, the experiences they were having and were putting themselves out there with a lot of bravery when handling uncomfortable situations, risk, and fear… and their smiles were genuine.

So, I decided in June 2017 to apply to this program in “One World Center," a school for volunteers in Michigan, USA and I moved without knowing anything of English…it was fun but very frustrating at the same time because I thought in any conversation, they were talking about me. I didn’t understand what they were saying, any time that somebody said "she" or "her," I thought they were saying how silly I was, hahaha.

One day I was alone in a store, and some random guy started bothering me and my reaction was telling him, "What is your problem?" and all my friends looked at me and asked, "Since when can you speak?" and I just started. I think I was just too afraid to fail before.

I spent 6 months In Michigan, living in a community and school, with people from different countries, sharing cultures, languages, and traveling around states doing presentations about our work, mission and fundraising for our future projects in Africa. That’s helping to grow my list of places in the USA, because now I’ve been in 18 different states, and believe me! almost without money… I had good luck, I met amazing people all around.

After the first 6 months I left for six months to Mozambique Africa and I had the most amazing experience of my life.

[Please read more about my world travelling adventures in future issues of the Lakewood Observer.]

Fernanda Quiroga is a Traveler from Chile.