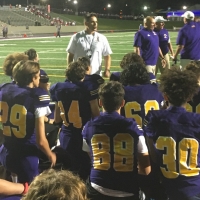 Head Coach Tom Thome congratulated his team after the game, but added "It's going to get harder."

The Lakewood football team defeated Fairview 55-3 on Friday night to remain undefeated this season. This is the program’s first 3-0 start since the mid-1990s, a fact that delighted the festive crowd at First Federal Lakewood Stadium.  The win was a  strong team effort, and senior running back Hakeem Quran had another career night.  He scored seven touchdowns, running for over 320 yards and making an interception on defense.

The Rangers took control early, receiving the opening kickoff and marching 80 yards for a touchdown score. Quran had most of the carries on the drive, but senior running back Jay Goudy ran 30 yards for the touchdown. Sophomore kicker David Burns added the extra point to make the score 7-0 with 8:40 left in the first quarter.

The Ranger defense held Fairview on the next drive. After the ensuing punt, Quran scored the first of his touchdowns on a 66 yard run with 6:34 remaining in the first period. Quran, who also plays defensive back for the Rangers, made an interception on the next Fairview drive. One minute later he ran for another touchdown. Quarterback Lucas Winters completed a two-point conversion pass to junior Maurice Williams to make the score 21-0.

Lakewood extended the lead to 35-3 at halftime behind two more touchdowns from Quran. This set the OHSAA “running clock” rule into effect for the second half, where Lakewood added three more touchdowns to provide the final margin of 55-3. The Lakewood defense was stubborn all night, disrupting Fairview’s timing and never allowing the Warriors to get into sync.

The Rangers will next travel to Rocky River for a Friday night matchup against the Pirates. River is 2-1 on the season, coming off a heartbreaking loss to Valley Forge on Thursday night at Byers Field. Valley Forge came back from a 21-point deficit to stun River, which will be in feisty mood next week. “Adversity is coming”, Ranger head coach Tom Thome warned his team after Friday’s win, “It’s going to get harder”.

Mike Deneen has extensive experience covering sports and community stories for the Lakewood Observer. Mike was a Senior Industry Analyst for the Freedonia Group in Cleveland, Ohio for 17 years. He has appeared on CNBC’s Closing Bell, NPR’s MarketPlace and has been quoted multiple times in The Wall Street Journal. He has made multiple guest appearances on ESPN Cleveland radio. Mike has also written for Inside Northwestern, a website that covers Northwestern Wildcat Athletics. You can reach him on Twitter at @MikeDeneen1