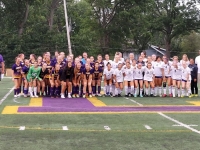 On August 13, Lakewood High School Girls Soccer team hosted St. Joseph Academy in a charity soccer game to benefit the Greater Clevend Food Bank. After collecting over 300 food items, the storm came rolling in and the varsity game was postponed. After some hasty coordination, the game was played on the following Monday giving the teams' supporters an extra opportunity to give. The final tally for the food drive was over 450 food items weighing in at close to 500 pounds of food to help local families.