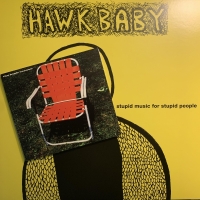 Hawkbaby finally follow up their demo tape from a few years ago with their debut vinyl outing. A true supergroup here, even if you wouldn't know it from the personnel listed on the back: members of The Darvocets, Magic City, Sockeye, a Perverts Again fill-in…the list goes on! Musically, the band is somewhere between The Darvocets and Magic City– the late '70s/early '80s punk stuff, Dead Kennedys, Dangerhouse, that kind of thing, but also leaning more towards hard rock and some more out there stuff a lot of the time, especially given the keyboards. Paul (guitarist) is a big Wall Of Voodoo fan, I've been told. Some of these, I am almost completely certain, are repurposed Magic City songs. I know "Cazadores" is and something about "Hologram" sounds awfully familiar too. I won't hold it against Paul or anything, in fact I like when people steal their own riffs, but it's worth noting. Of course, it's always a delight to hear Larry Alien sing, which we've been lacking since the demise of Wetbrain and the disappearance of Drum Machine– no one does it quite like him! My favorite Larry moments here were at the coda (following a fake ending) of the opening "He Said She Said" where he's almost making dolphin sounds (Larry? Dolphins?) and on "Shovin It," which might be my favorite song on here– it's got an intro with what I am pretty sure is an acoustic guitar and some tasteful keys. I'm as shocked as you are. Lyrically, it's a continuation of the Doctor's (professor of alienology) work in the Darvocets and Wetbrain– though I think the best moment is when he drops the fake-deep classic "real eyes realize real lies." I didn't know Larry was on Tumblr. (I've looked this up and apparently it's a Tupac quote– my point stands: didn't know Larry was into Tupac!). "Pop Punk Saved My Life" is not a pop punk song, but is another highlight for being a pure dumb rock song with a nice outro where we're informed all the things the narrator is no longer, including hardcore, metal, straight edge, and a skateboarder. Paul plays some hot leads on here (the guitar solo on "Sit Back, Relax, Enjoy" is a highlight) and the rest of the band is pretty good too. Matt, or Hairy, or Rick, or whatever the drummer is called is very good at what he does. It's not my favorite work by any means of most of the people involved, but that said, it would be hard to top some of their past musical achievements. I'll also add that I didn't really like it at all at first, but it grew on me with repeated listens, so bear that in mind, I suppose.

This is the latest band from Alan Grandy (probably best remembered from the Terrible Parade, but also from his work in Sputnik, Fits Of Hail, and on his own), joined here by Jeff Harmon on drums and harmony vocals. It's not completely removed from some of Alan's past music, particularly his more acoustic stuff, but this band takes a far more country angle on things. There are a couple instrumentals, one of which is an Ennio Morricone cover, there's a bad novelty song called "Cold Potato" (look, I guess if you're doing a country band you have to have a 'funny' song, but that doesn't mean I have to like it), and decent songwriting and nice harmonies throughout. It's pretty laid back, at times even sounding like two pals playing on the front porch, which can be a good thing. Most of the songs fall into two categories for me: songs that sound like they were written in this style and songs that were made to fit this style. The latter category is most obviously defined here by two Terrible Parade redux versions: "She Don't Care About Time" (which I know somehow is a Terrible Parade song and yet it doesn't seem to actually be on any TP record) and "Big World." "She Don't Care About Time" is excellent, maybe my favorite song here, but it doesn't sound like a country song. It sounds like an acoustic alternative rock song with some nice slide guitar and a banjo solo. And there's nothing wrong with that! They're hardly the first to do it. On the other hand, "Big World" becomes a slow waltz and doesn't work so well for me, but maybe that's just because I know and like the original version so well. Maybe the most successful song here is the closing "Too High To Get The Lowdown," which both feels like it was legitimately written as a country song but also delivers Alan's songwriting charm and personality all the way. (I liked "Eyes Wide Open" in this category too, and it kinda reminds me of Ray Price for some reason, but it goes on for over five and a half minutes and that's just not right.) It's a nice little record, and fans of the Terrible Parade (or Alan's other past work) should certainly check it out. 3/5