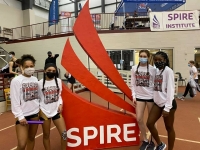 The 4x400 relay earned the highest placing of the team, finishing 11th in the state. The 4x200 relay team finished 13th. The 4x800 relay of Mallory Zavatchen, Sacha, Sadie Gregg and Roche finished 18th. Besides Smith in the hurdles, Bradford also competed in an individual event, finishing 19th in the 200 meters. Teeghan McGann qualified in the 800 meters but was unable to run.

Congratulations to all the girls who competed and to coaches Stephanie Toole and Adam Swiat!