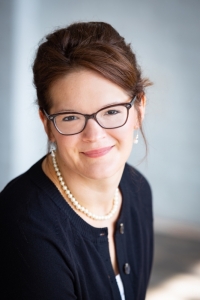 As a high school graduate, Eliese Colette Goldbach felt destined for the convent and life in a religious order. Instead, the 29-year-old found herself wearing a hard hat, operating a crane, and driving a forklift. As one of the few females in a male-dominated workplace, the ArcelorMittal Cleveland mill was certainly no convent.

The promise of a high-earning paycheck brought her to the unlikely vocation as a steel worker. Like most Cleveland natives, she had passed by the orange flame of the steelyard for years without a second thought. It wasn’t until she was inside the mill that she realized the world it represented. What outsiders saw as a sign of pollution symbolized a booming business and a healthy economy to those inside the mill walls.

Named one of the best books of 2020 by NPR, "Rust: A Memoir of Steel and Grit" tells Goldbach’s story from the belly of the mill. With the contentious 2016 election as a backdrop, her memoir reflects on her life as a young liberal female amongst her blue-collar conservative counterparts. But according to Goldbach, “There was no division so great that it could eclipse the unity that had been forged in the light of the mill’s orange flame.”

Goldbach is a graduate of Saint Augustine Academy, the current site of Lakewood Catholic Academy. After graduating from John Carroll University, she received an M.F.A. in nonfiction from the Northeast Ohio Master of Fine Arts program. Her writing has appeared in Ploughshares, Western Humanities Review, Alaska Quarterly Review, McSweeney’s Internet Tendency, and Best American Essays 2017. She received the Ploughshares Emerging Writer’s Award and a Walter Rumsey Marvin Grant from the Ohioana Library Association, which is given to a young Ohio writer of promise. She lives in Cleveland.

An exclusive author video will premiere on Thursday, March 25, 2021 at 7:00 p.m. View it at facebook.com/lakewoodpubliclibrary