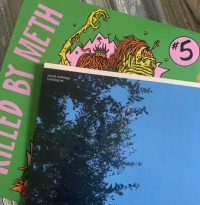 Note: the CD and digital versions have more than 9 tracks, but I just have the LP so that's what I'm reviewing here. This was the first record by the pride of Westlake, originally released 11 years ago. It is really interesting to hear these tracks (and the second, self-titled LP) in comparison to the music Cloud Nothings has made since– it's kinda like two different bands, though it must be said that both of those bands are very good. This record is all Dylan Baldi doing everything I'm pretty sure, which is also probably the reason for the big change in sound later. This record is basically a lo-fi power pop/indie rock record from what I would guess were the glory days of bedroom indie rock. Don't ask me, I wasn't there. I've never been too into that sound, but Cloud Nothings on this record are a cut above almost all of those bands. Dylan could (and still can) write really catchy, hooky tunes. Most of the ones here are somewhere in the range between Matador-era Jay Reatard and Car Seat Headrest, though I don't know if either comparison is quite right. The title track and "Strummin" are both very reminiscent of the Strokes at their catchiest and best– on the latter, the "my baby's been gone…" part almost sounds like he's doing a Julian Casablancas impression. My favorite tracks here are "Can't Stay Awake" (where Dylan's screaming guitar solo and falling apart drumming are almost a precursor of things to come), the funky-riffed "You Are Opening," and "Hey Cool Kid," which besides being a very melancholy but very hooky tune with dark lyrics (from what I can make out) and vaguely ominous harmonies holds a special place in my heart because it was the second Cloud Nothings song I ever heard (after "Stay Useless"), sometime in probably 2013. That said, every song on here is pretty good and it's easy to hear why this record caught people's attention. 4/5

I always check out these Killed By Meth comps because they usually have at least a couple Cleveland bands on them. That said, they don't usually feel like good documents of the best of the current punk scene but instead a bunch of also-rans, bands that weren't good enough to get a Total Punk single (even though there are a couple 'bigger names' on here, like Erik Nervous and Archaeas, both of whom actually do have Total Punk singles of their own and who have two of the better songs on here-- our pal Erik seems to be covering a song from Whose Line Is It Anyway? and that's the kind of thing that I also find funny, so props to him there) (Also, this is not to say that I consider Mr. Rich Totally Punk an arbiter of good taste-- he's put out a lot of really great punk singles but also quite a few pretty crappy ones). Apart from that, most of the rest of the tracks on this thing are either painfully generic or have something that makes the song a non-starter ("Spinners" from The Smart Shoppers is a particular groaner– the aforementioned Whose Line song might be for some people too, I wouldn't hold it against them if they thought it was horribly corny). Maybe it's the comp nature that leads to these bands sending in tracks that are sorta throwaways– I've seen Alpha Hopper before and I know they're a decent band, but "Yardbird" is really not their best. Ohio is represented here by Columbus's Phlox (not good), Cincinnati's Black Planet (actually a highlight, a pretty catchy garage-y post-punk kind of song– I would be willing to check out more from them, and that's more than I can say for most of what's on here), and the one Cleveland band here, Au Shovel. This particular group is made up of two former Jim Davis members (who were also in The Sight, The Roobydocks, and many other bands, of course (they're from Cleveland)) and I happen to like both of them and the music they make, and I like their song here, "Flies On Shit," even though it's doomed by a crummy, half-baked (or perhaps completely baked, maybe that was the problem) mix. So take all that as you will. Those who like the state of punk today will find more to like here than I did, but even I (an aging, increasingly curmudgeonly music critic) found a few things worth hearing. I still can't help but feel like this will be in everyone's dollar bins in about 18 months. 2/5