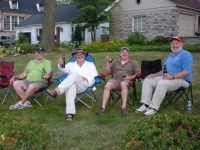 From left to right: Fred, Stephen Davis, Steve Ollay, Joe McLain. Sitting if the front yard during a 4th of July celebration.

I put down a book I was reading and called Steve Davis.

The book was “The Happy Islands of Oceania: Paddling the Pacific” by the travel writer Paul Theroux. I had just read a mention of canned corned beef, which in the South Pacific went by the name of “pisupo.”

I knew this already, thanks to Steve, who had spent part of his childhood in American Samoa. He relayed to us the island pidgin for several words and phrases such as “party” and “I’m gonna kick you in the mouth.” I forget the island translation for those undoubtedly helpful phrases, but I told Steve that I had just read Theroux’s account of the etymology of “pisupo,” which corresponded with Steve’s account. The first canned food to reach the happy islands was pea soup, which was not well received. The second, however, was canned corned beef, which was an immediate and lasting hit. But since it came in the same sort of can as pea soup, corned beef became known as pisupo. Actual pea soup, presumably, was forgotten.

“So. Did you think I was lying to you?” Steve asked when I called him. I admitted that the whole thing seemed improbable, but I was happy to find out that it was true.

“Improbable, but true,” is a good descriptor for Stephen M. Davis, whom we lost on [need exact date] in the already-horrible year of 2020. I met him when I worked in the publications office at Case Western Reserve in the mid-1980s. He was a print sales rep for Sherman Litho and called on us from time to time.

My first extended conversation with him was typically improbable, but true. I was at my desk one afternoon when my phone rang. It was Steve. I was accustomed to sales calls from printers when idleness threatened their shops and I expected Steve to ask if I had any print jobs coming up.

That’s not what he had on his mind. He started talking about Jorma Kaukonen and Jorma’s work with the Jefferson Airplane and Hot Tuna. We chatted for a while about Embryonic Journey and Rev. Gary Davis and Jack Cassidy and Jorma anecdotes from Antioch College. I thought it would lead into a sales pitch, but it never came.

That was the start of our friendship. We soon discovered that we lived a few blocks from each other in Lakewood — he, Ruthy and their kids lived on Wyandotte while my wife Helen and I lived on Robinwood with our kids.

Our time together was most often spent sitting on a porch or on “hoofs” around Lakewood, wandering down the more obscure streets and pointing out interesting aspects of the vernacular architecture. And always talking. Steve was a world-class talker.

Steve had anecdotes about meeting the most improbable people. I mentioned Russell Means, the American Indian activist, once. Steve had met him. As I recall, Steve had a project to do in high school and Means had an American Indian Movement office in Cleveland, so Steve went down there and interviewed him. I brought up Ken Kesey and, of course, Steve had a story about meeting one or more of the Merry Pranksters when he was at Ohio University.

He had an enviable way of approaching complete strangers and engaging them in conversation. I’m no introvert, but Steve would easily begin a chat with anyone standing nearby. Improbably enough, Steve was uneasy when it came to anything like public speaking. His reticence in addressing even an ultra-friendly crowd under very informal conditions surprised me.

“You will strike up a conversation with a fence post!” I exclaimed in incredulity the first time I witnessed this wholly unexpected case of the shys.

“Well, there wasn’t a fence post there, Joe,” he said by way of explanation.

We found out early in our friendship that we were closely in accord in terms of musical taste, politics, food and beverage preferences and so on. We were both big fans of bluegrass music and admirers of the work of David Bromberg and Clarence White. Steve called me once to state that he had just got off the phone with Bromberg. I might make something like that up; Steve wouldn’t. I don’t remember where or how he got the phone number.

Steve and I were both family men, a common denominator that was mostly acknowledged tacitly. He and Ruthy had twins the same year that Helen and I had our son. Both couples had older kids, too. Both of us understood when a hoof or a porch session was preempted by familial responsibilities. We enjoyed exchanging points of parental pride as well as wryly relating the day’s childrearing disaster stories that were already becoming funny.

Steve was very civic minded. He and Denny Wendell and I were on a committee to promote passage of a Lakewood Schools levy. We heard that there was some organized opposition and decided to take direct action. Under the cover of night, we drove to a printing company we believed was being used by the opposition group. We made a daring foray into the firm’s dumpster, emerging with a wad of flyers, still wet with ink. The levy committee was thus able to counter points made against the levy in advance.

The levy passed. Denny had the best line regarding this daring episode. Asked about his role in, Denny replied tersely, “Special ops.”
Steve was also involved in city government, serving on several city charter commissions. I began referring to him as Citizen Davis, a sobriquet that spread via my children. Steve would drive to the bank, going down Robinwood from Franklin, slowing down to see if I was outside my house. One evening he called me.

“You know, I was driving down your street, and your kids saw me,” he said, feigning annoyance. “And they all started yelling ‘It’s Citizen Davis!’ ‘It’s the Citizen!’ Then all those other neighbor kids started yelling about me being the ‘Citizen.’’’

A job offer at William & Mary caused us to leave Lakewood in 2004. Steve hosted a big goodbye party for us at his house. It was an affair of note, and not just for the sheer good time had by all. Ken Warren, the director of the Lakewood Library, met Jim O’Bryan at the party and the two of them went on to found the Lakewood Observer. With the assistance of Citizen Davis, of course.

Steve and I remained in contact since I moved. We would get together every time I was in Cleveland, but mostly it was by phone. One of us would call the other, usually on the drive home from our offices. I spoke to him last on Monday.

The past couple of days, I talked with Jim O’Bryan about Steve, his life and the gaping hole he leaves in our world.
“Don’t mourn, Joe,” Jim said. “Celebrate every moment we had with him.”

It’s excellent advice and I sit here trying to capture more improbable truths about my friend. For one thing, he had an excellent sense of humor and laughed easily, but had no patience for standard jokes of the setup-and-punchline variety. I could go on, relating our numerous discussions of the albums-on-a-desert-island nature, each characterized by a painstaking establishment of ground rules. A number of gormandizing lunches. There were our forays into home improvement. And always conversation. Politics. Lithography. Lamentations about the rise of paraprofessionalism in the world of copywriting and graphic design.

One of the commonest things that has gone on inside my head for decades is a mental note that “I’ll have to mention that to Steve Davis.”

He’s been gone less than a week and I’ve caught myself thinking that twice already.