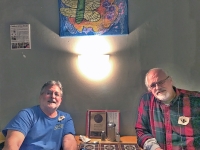 This wasn’t the script I imagined. It was only tomorrow. December 2, 2020. Nothing to plan for. Nothing to stress about. But it wasn’t a normal Wednesday. Steve Davis didn’t do things conventionally. Why would he? What was the point? If it were planned then he’d already know the outcome. Better to seek out or stumble on the most unique observations, enjoy them, and save them enhance a story or conversation.

A friendship of almost 50 years gives countless Steve Davis stories. Some I can recall instantly. Others appear when I see a unique thing, something old yet useful, or something playfully crafted in a purposefully understated way. Recently Steve delighted in his dead basil plant adorned with miniature Christmas lights. Perfect.

Music was a big part of Steve’s life. He listened. He played and had fun with it. We shared an appreciation for the simplicity of unproduced acoustic strings, and vocals that had texture and soul. Blues. Bluegrass. Jorma. Bromberg. Doc, Vassar, Taj, Keb, Fahey, and so on. Always under the radar, purposefully. And Steve went beyond the appreciation of the musical sound. He was an encyclopedia of the artist’s history and influences.

Steve was an Art Major at OU and his appreciation was broad and imaginative. He shared his enthusiasm joyously. He encouraged me to try glass blowing. I made only one very flawed “goblet” but it’s still being used today. In his photography you could see what he saw and why it was interesting to him. It was a gift he could share. There were many drawings, paper relief pressings, and prints. One day Steve shared his excitement about an Art class taught by AEthelred Eldridge. His description of the class clearly meant it was something I would appreciate. New ways of thought for sure! That connection remained an integral part of our friendship to this day, and several of Steve’s children and family members were able to take the same class with AEthelred at OU years later. It’s a gift we all share and not likely we’d have that gift if not for Steve’s adventurous nature.

Steve was loyal. To his friends. To his brands. And to his family. Family was it for Steve. He always made time for his family. The fastest way to end a phone call with Steve was when one of his children were calling him. Otherwise, Steve could talk. Oh, how he could talk. About anything. The stranger the topic and more obscure the better. Convention was boring. Steve had fun and delighted in the calls, the observations, conversations that sometimes were just plain silly. But they were important. From college days to present we frequently went down the rabbit hole talking about bridges. Not necessarily the physical kind, rather the connection of everything past, present, and future. We recognized that everything is a bridge. Everything.

Given his ability to remember things, I grew to rely on Steve for details of our college days. Now there’s a void. It’s a huge void that will likely never be filled. But it’s a bridge nonetheless. I’ll always feel the connection with Steve and am so fortunate our paths crossed during those early college days in 1972 and remained solid through all these years.

My heart aches. Til the next time I see something that makes me think of you, RIP Stephen, my friend.