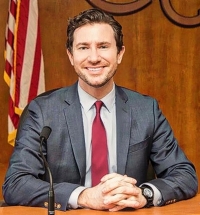 The delegates of the North Shore AFL-CIO elected, by acclamation, Dan O’Malley as its new leader this past Wednesday. O’Malley, who also serves as president of Lakewood City Council, is succeeding Harriet Applegate who is retiring.

O’Malley, 35, is a Cleveland native and a graduate of John Carroll University. He previously served at the North Shore AFL-CIO as campaign director and prior to that he spent eight years with Working America, the last two years as the organization's state director in Ohio. O’Malley is a member of the Office and Professional Employees International Union (OPEIU) Local 1794 and American Federation of Musicians (AFM) Local 4.

“As a fourth generation union member, it's the honor of a lifetime to be leading the Greater Cleveland labor movement,” O’Malley said. “We have incredible challenges and opportunities and I will work hard every day to address them both,” he said. O’Malley emphasized that his priorities for the labor federation are to assist affiliated unions in organizing campaigns, to build strong relationships in our communities and to provide a strong voice for workers at all levels of government.

“Dan is eminently qualified to fill this position,” Harriet Applegate said of O’Malley and his new position. “Not only has he served the federation for the last five years as campaign director, he is also adept and intimately acquainted with the political process in all its aspects,” she explained. “Dan knows the labor movement and he knows the community in which it resides,” Applegate said.

The North Shore AFL-CIO Federation of Labor is the organized voice for 80,000 working people in Cuyahoga, Lake and Geauga counties. Over 146 Local unions are affiliated with the labor federation.