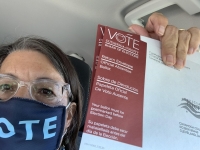 Election Day 2020 is only a couple weeks away, but with early and mail-in voting, you can submit your ballot today. The Cuyahoga County Board of Elections is open for early in-person voting now through Monday, November 2nd at 2:00 p.m. You can also request your absentee ballot up until three days before the election. Once you have received and completed your ballot, it must be postmarked and sent to the BOE or placed in the ballot drop box prior to election day; however, voters should submit or send their ballots as soon as possible.

This year has been momentous for numerous reasons, but one significant milestone worth commemorating is the 100-year anniversary of the ratification of Nineteenth Amendment to the U.S. Constitution which gave women the right to vote. This allowed women to make their voices heard and represented one ballot at a time. In 1920, only about 36 percent of eligible women voters cast their ballot, compared to 68 percent of men. Now, women voters outnumber men at the polls 63 percent to 59.

I am extremely proud of our very own city of Lakewood for its contribution to the suffrage movement. Three years before the Nineteenth Amendment was added to the Constitution, Lakewood extended the right to women to vote on municipal issues and to run for local office. I know this community’s commitment to equality, civic duty, and efforts to support women continue today. This dedication is evident in Lakewood’s female city council members, Tess Neff and Sarah Kepple; our wonderful Mayor Meghan George; and, because of this community’s support, I am the first woman to represent Ohio’s 23rd Senate District.

While we commemorate the success of the women’s suffrage movement, we must also acknowledge that this right was not extended to all women. Due to state and local laws, loopholes, poll taxes, literacy tests, and violence, women of color were not guaranteed the right to vote. In fact, Black women and Native American women were not fully enfranchised voters until the passage of the Voting Rights Act of 1965. Even now, voter suppression tactics seek to disenfranchise people of color and low income communities.

Despite these challenges and those associated with the pandemic, I am hopeful that women voters will turn out in droves to vote this year. This election is so important and women remain an essential part of our electorate. In this year of uncertainty, voters, especially women voters, should feel confident and more empowered than ever in asserting their voices at the ballot box.

Antonio serves as Highest Ranking Member of the Senate Health, Transportation and Joint Medicaid Oversight Committees. She also serves on the Finance Subcommittee on Health, and Ways and Means Committees. She is also a member of the Ohio House Democratic Women's Caucus—previously serving as chair—and is the State Director for the Women Legislators’ Lobby.

She has been a dedicated champion of workers’ rights, high-quality education, our local governments, equal rights for women and the LGBT community, healthcare for all and fighting the opioid crisis.

Antonio is recognized as a leader who reaches across the aisle to get things done. As a result, she has worked to pass legislation such as Ohio’s historic adoption open records law (SB 23/HB 61) and a step therapy reform law (SB 265/HB 72). During each of her four terms in office, Antonio has introduced the Ohio Fairness Act (now SB11), to provide civil rights protections for members of the  LGBT community,  as well as an end to Ohio’s use of the death penalty and an array of other bills focused on improving the lives of all Ohioans. Antonio continues to be an established expert in health policy in the General Assembly.

The first in her family to graduate from college, she holds both MPA and B.S.Ed. Degrees from Cleveland State University and was named a CSU Distinguished Alumni in 2013. She is also an alumnus and Bohnett fellow of the Kennedy School Harvard Leadership Program (2011).

Daughters Ariel and Stacey have made Antonio and wife Jean Kosmac, very proud as the girls engage in their adult life journeys.