John's Diner - Thanks For The Memories 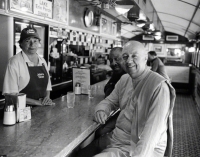 For almost fifty years, John’s Diner has served breakfast, lunch, and dinner seven days a week, 365 days a year. It’s been a go-to spot for many regulars like Phil, who stopped by for a cup of coffee every day. A couple of years ago, noted peace activist Bhaktimarga Swami paid the diner a visit during his walk across America.

But even better than the food were the people who served it and cooked for so many over the years. Rosemary, Anna, and Marsha promptly brought your orders even when the place was packed, as was often the case on Saturdays and Sundays. Bridget, whose soups were the real McCoy, kept the food coming even on the busiest days. Bill, the handyman, ensured the diner was in tip-top shape and that all the ingredients were on hand.

John Pasalis, the owner, sat at the end of the long granite counter or at the table next to the counter, greeting us by name and thanking us as we left. If you were lucky enough to stop by on Bridget's, Rosemary's, or John's birthday, they treated you to a piece of birthday cake.

In addition to the traditional diner fare of eggs, pancakes, hot turkey sandwiches, gyros, burgers, and comfort foods like lasagna, the diner served a fine turkey dinner on Thanksgiving and Christmas. Many of us came to rely on the warm atmosphere, piping hot turkey, and pie to tide us over on a holiday.

Sadly, John's Diner closed in March and will not re-open. Thankfully there are other diners in Lakewood: The Coffee Pot on Madison Avenue in Birdtown, the Gray Dog on Detroit Road across from St. Edwards, and the Shore on Detroit Road.

While I’m grateful for so many memories, and that John and the staff welcomed my cameras and me, Thanksgiving and Christmas just won’t be the same without dinner at John’s Diner.

A photographer and former Navy officer, Bob Soltys divides his time between Lakewood and Paris.

A photographer and former Navy officer, Bob Soltys divides his time between Lakewood and Paris.