Warmth Is Found 365 Days A Year At The Summer House 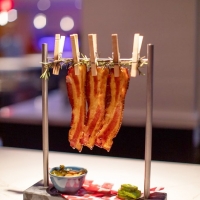 What was once an iconic restaurant on Lake Rd. back in the day, has gotten a face lift. The old Swingos, and before that the Silver Quill on the ground floor of the Carlyle building is now the Summer House. Swingos closed its doors in February of 2009, staying empty until Tony George, Cleveland restaurateur decided to put his signature on it. George spent three years renovating the place, opening in March of 2020, only to be closed due to Covid-19 a week later.

Summer House Executive Chef Vinnie Cimino and sous chef Ryan Boone took a grave situation and turned it into a positive, the starting of Cleveland Family Meal. Cimino and Boone turned Summer House’s emergent kitchen into a bustling food bank for those in need, particularly restaurant workers, who often work paycheck to paycheck.

The Summer House has since reopened, after Gov. DeWine permitted restaurants to reopen in late spring. However, the giving didn’t stop there. Tony George has dedicated Summer House to the memory of his late son, Michael T. George, known as Mikey to the community. Mikey, a student at St. Ed’s, lost his battle with cancer in June of 2019. Profits from the Summer House go to a non-profit organization based in Lakewood, called Awakening Angels. Awakening Angels shares the profits with the Red Cross, the Michael T. George Center, Down Syndrome Research and others.

Adorning the walls of Summer House are canvas photos of Mikey, with his siblings, outdoors in the “summertime.” Mikey’s favorite family vacations were their times at Kelly’s Island, it’s apparent by the huge smiles in the paintings. The paintings depict the ‘vibe’ at the Summer House, even on a cold, chilly day, as it was when I decided to visit, the atmosphere is one of warmth, good feelings, family and community.

The bar seats 50, the entire restaurant is enclosed by glass, there’s not a bad seat in the house. The view is spectacular, (even the cloudy fall day I was there). I sat at the bar, was greeted by Deja, ordered a Cabernet, and was checked on by other staff periodically in a warmhearted way.

The scratch-made kitchen finds its place somewhere in between American, Italian and Mediterranean cuisine, while utilizing local vendors, and seasonal dishes with an eclectic twist. I ordered the hummus, with home-made warmed pita bread, topped with crispy chickpeas. Being a chef in San Diego for ten years, I’m particular about certain culinary delights. I also make my own hummus, and I have to admit, I want that recipe!

One of the more popular items is the Clothesline Bacon appetizer, the bacon is hung by clothespins, torched, including the rosemary at the top, and sent out drizzling on Kool-Aid pickles and pickled cauliflower placed strategically underneath. Flatbreads, kabobs, burgers, pasta and walleye also hold a place on the menu, while being easy on the wallet.

Sanitation seemed to be a high priority everywhere, as I cast my eyes on the amazing view of Lake Erie and the Cleveland Skyline. If what you’re looking for is to be treated in the warm and gracious manner you’d treat a guest in your own home, this is the spot. Be captivated by Lake Erie views, come for the food and stay for the vibe!

Eva Starr recently moved back to her heartland state of Ohio, after the transition of her mother. Starr spent the last ten years in San Diego digesting the alluring buffet of wisdom the West Coast had to offer. While there she attended the San Diego Culinary Institute, and worked as a chef in San Diego.
Starr also published her book Quit ‘Should-ing’ on Yourself, while in San Diego featured at the 2016 LA Times Book Festival, and Oprah Winfrey’s Reading Room.
She continues to follow her metaphysical path, teaching Astrology, hosting her television show Reach for the Moon, and exploring the diversified culinary delights Lakewood has to offer.