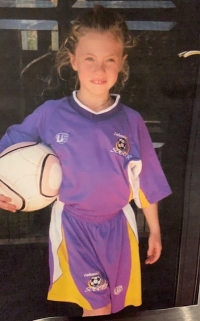 Sophie Lipka in her early days of playing soccer for Lakewood. She was a U8 in this picture, Lakewood travel team. Coached by her father, Ken.

Senior nights are a rite of passage, an occasion to honor all of those who have typically spent four years playing for their high school team.

For every hour players spend in the spotlight of games, so many more are spent in practice, conditioning through hot summer months and honing their craft. As such, the game isn't so much about the score, although it's nice to win, as did the Lakewood Rangers Girls Soccer Team today in a running clock victory over Normandy.

It's quite fitting that senior Captain Aubree Nagel would tally the first goal on one of her signature strikes from 30 yards out. Senior Co-Captain Quinn Costanzo also scored in the first half, while Senior Co-Captain Jasmine Magda played her typically strong all around game. Every Senior started, including Willow Rosser, Paw Thaylay Say and Sophie Lipka.

Senior Night is special. Our PA guy, Mr McCollum, sings the National Anthem, every senior starts the game, parents bake and pass out cookies. There are indeed many magical senior night moments, but for me, seeing the students walk on the field with their parents tops them all. More than anything, they have provided the foundation for these young women, the work ethic and persistence it takes to play this sport. They drove them to practice, signed them up for youth leagues, endured tears, celebrated victories and comforted their kids after losses. They earned this moment

This years Rangers (4-1, 2-1 in the GLC) are quite a strong team. Coach Ted Nagel has a talented and hard working crew, and he is guiding them well. But every year, win or lose, we have a community based team of Lakewoodites that we can all be proud of.