Heaven On Earth At The Elmwood Bakery 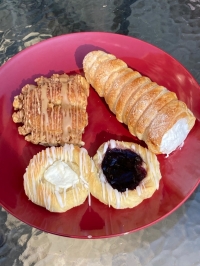 Being that I lived in Lakewood in the late 80s and thru the 90s I don’t know how in God’s name I missed this little slice of Heaven. Since I moved back to Lakewood in 2016, I’ve become a serious gastronome. Let’s face it, how do you live in Lakewood without become a foodie, oenophile, or a libationist?

One fine day, (no George Clooney was not there) I checked out this obscure bakery with my friend Sparky. The owner Andy Rerko was understandably in the back busy baking his culinary delights and didn’t have time for chit-chat. We ordered a bear claw, a lady lock, sticky bun and a cheese/fruit Danish, and off we went.

I went home and treated my taste buds to some homemade sweetness. Sparky devoured the Lady Lock, and the sticky bun, saving the bear claw for a Harley road trip through the Blue Ridge Parkway the next morning.

Left to my own research, I found out this last of the old-school bakeries has been around since the 1940s. It’s claim to fame, not to be out done by the awe-inspiring patisserie, and easy on the wallet prices, is a spotlight in the 2003 movie American Splendor.

From the plethora of reviews I’ve read online, they’re known for the date-nut cake, pepperoni bread, apple dumplings, pretzels and the beat goes on. Rave reviews were plentiful on the wedding cakes, specifically the aforementioned date-nut bread.

Check it out for yourself, I know I’ll definitely be back to give the pepperoni bread a shot.

Eva Starr recently moved back to her heartland state of Ohio, after the transition of her mother. Starr spent the last ten years in San Diego digesting the alluring buffet of wisdom the West Coast had to offer. While there she attended the San Diego Culinary Institute, and worked as a chef in San Diego.
Starr also published her book Quit ‘Should-ing’ on Yourself, while in San Diego featured at the 2016 LA Times Book Festival, and Oprah Winfrey’s Reading Room.
She continues to follow her metaphysical path, teaching Astrology, hosting her television show Reach for the Moon, and exploring the diversified culinary delights Lakewood has to offer.