Filling Up The Streets Is The Only Thing That Works: Reviews Of Recent Releases By Local Bands, Pt. 106 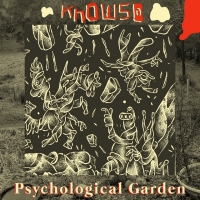 The first of two digital-only (for now?) Knowso EPs released in the past few months. They're down to a two-piece here, with Jayson Gerycz on drums and Nathan Ward on everything else. In that way, it's kinda similar to the first Knowso tape, which I think was just Nathan and Jo Coone. They actually redo a track off of that original tape, "Into A Bug," which already has pretty funny lyrics but is improved even further by Nathan's deadpan delivery. "Isn't it funny how things work out…My life is done now," or the brilliant couplet "My brain's on overdrive / I'm on news channel 5." (A quick digression here, but you know what song from that tape they should bring back out? "Chemical Drink." What a ripper.) This is a slightly more herky-jerky version than the original, as I recall, but still good. Herky-jerky is something of an essential element of the current Knowso sound, after all. The songs on this EP in particular are comprised of a clean guitar and a distorted bass playing the same thing (which actually makes for a pretty cool sound), with the same thing usually being a staccato, pretty rhythmic punk tune in a weird time signature-- not in a math rock kind of way because I don't think they're doing this for those reasons, but more in the way that that's just how Nathan writes, kinda like Spike In Vain. I mean, "Staring At The Spiral" sounds like Neo Neos and that's about as far from math rock as you can be. Certainly less aggressive than past material as well, particularly in comparison to, for example, "Look At The Chart," but again, it's a closer sound to that original demo in a lot of ways. Also, there's more of a lean towards post-punk here, while still being, I'd say, punk. The lyrics on this EP are generally kinda out there, a little bit sci-fi but not quite in a Darvocets way. Sometimes they're about completely normal things, but seen through a filter where it's just a bit off. Like a photo where the color balance is wrong but you can't quite say how. There, that's a poetic description for you. My favorite here, particularly lyrically, is probably "Turning Planet." I really like the lines about "skipping cinderblocks in a cemetery" and "stepping on the names of the dead and dying." Cool stuff. 3.5/5

This is the other of the two Knowso releases in this week's column (and I hear they've got another real record out now as well, so stay tuned for that) and my preferred one of the two. Same lineup and same general sound, but this one's more aggressive, musically and lyrically. "Psychological Garden" lived up to its title, sorta; this one is a punk record. The recording also sounds a little fuller and crisper, too. This EP kicks off with the driving "The Plants," which has some great misanthropic/general world-hating lyrics, which I love to hear Nathan Ward doing because he's very good at songs like that. It doesn't let up after that, either, going right into "Fucker Such As You," which is as positive and happy as you'd think with that title. Really great. The musical energy goes down but not the anger of the lyrics for "You Lick The Boot," where Nathan decries the state of things in the same monotone he sings all these songs with, yet you can tell that he's serious. And justified. Cool intro and outro, too. "4th Wonder" closes this thing out with a kind of circular riff, another weird time signature one, with Nathan's rambling-- I can't tell whether this one is a positive or negative one. Maybe something in between? Another good record from Knowso. 4/5