The Rockport Miracles-Part 4: Episode 31: The Ballad Of Derecho Dan Continues: 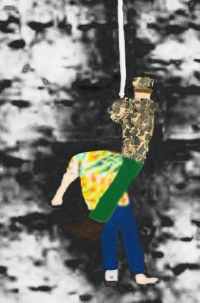 Hope and desperation swabbed the decks of Coast Guard Cutter "Darryl A. Levy" as the splendid vessel raced through the choppy waters of Lake Erie in the aftermath of Storm 5.6. When the ship finally reached Little Dan’s last known position, the only thing they found in the water were pieces of a rubber raft and one of Little Dan’s Red Ball Jets.

Onboard the ship were Little Dan’s Aunt Rowena Gridley, Rockport Police Chief Tom Graber, and Little BD, a beloved Boston Bull terrier. When Rowena saw the pitiful remains of the raft and shoe her hope turned to despair in an instant. She began screaming, “Dammit! Dammit!.” Crestfallen, Rowena muttered quietly to herself, “What will I tell his mother?”

The Skipper grabbed the microphone and demanded more information. “This is the Coast Guard Cutter, 'Darryl A. Levy,' report your circumstances!...OVER!”

“WE FOUND LITTLE DAN!” was the amazing response. “HIS 'CIRCUMSTANCES' ARE PRECARIOUS!!” Rowena impulsively yanked the microphone out of the Skipper’s hands. “IS HE ALIVE?!!” she demanded to know, “TELL ME! IS LITTLE DAN STILL ALIVE?-OVER!” After an excruciatingly long pause, the halting voice crackled back, “We’re not sure...Please hurry!” The Skipper didn’t waste a second. He turned to his crew and screamed, “RIVER CITY YACHT CLUB! FULL SPEED AHEAD!”

As the good ships "Edanola" and "Darryl A. Levy" raced to save Little Dan, chilling rumors had already begun circulating throughout the West Shore communities about “the boy who kills storms.” As citizens emerged from nuclear fall-out shelters, basements, and dive bars all over Rockport, those with the talents to do so got busy creating poems, songs, tales, and illustrations about the “Storm Killer from Rockport.” A local hero who stood alone against Mother Nature and won...well, sort of.

Meanwhile, the skilled and brave volunteers who call themselves, “The Rocks of Rockport” had sailed into more than what they bargained for. While en route to save Little Dan, they’d received a tip over their CB radio alerting them about an ongoing riot taking place at the River City Yacht Club. The voice on the radio said a fight had broken out over "the body of an unknown male.”

Though the raft had been miraculously pulled away from his boat bomb by a thentofore unknown force, it wasn't far enough from Water Zero to escape the whirlwind he’d unleashed. Several people in downtown Cleveland were watching the action from the observation deck of the Terminal Tower. They all swore that the explosion had briefly exposed the lake bottom and they were correct.

As he clung to his raft like prickly heat, Little Dan was sucked to the bottom of Lake Erie and then loaded into the trebuchet of a massive tsunami. The 16 foot wave sling-shotted the 6’ 5”, 260 lb. teen-ager up the mouth of the Rocky River where he landed onto the roof of a houseboat that once belonged to Eliot Ness. The houseboat had been tossed around like a Tonka toy by violent wave action which tore the docks and mooring lines to shreds. By the time "The Edanola" and its rescuers arrived, the houseboat had been cast adrift and became snagged in the middle of the Rocky River.

By then huge crowds had formed atop the cliffs on both sides of the Rockport/River City border. Enraged River Citians had spotted the body of Little Dan on the roof of the houseboat and recognized his tie-dyed t-shirt as the same worn by the demon who’d damaged their homes, coated 10 square miles of River City with blenderized fish guts, and caused the traumatic loss of their mayor’s nose. They were in a very ornery state.

As horrified Rockporters looked on, a River City man in army fatigues had rappelled down the 90 foot shale cliffs to the houseboat below and tied a rope around Little Dan’s seemingly lifeless torso! Then, he signaled his fellow citizens to begin pulling Little Dan up the cliff and into the clutches of mob justice. Not about to allow that to happen, hundreds of crazed Rockporters stormed into the river valley like rabid maniacs intent on saving their hometown boy. The surreal, knock’em-sock’em battle that ensued (later remembered as “Shale Wars”) was fully underway by the time the Rocks of Rockports and Coast Guard came upon the scene.

The battle of Storm 5.6 was finally over. The battle for Little Dan Newman and the soul of Rockport had just begun.

(Excerpts from, “The Ballad of Derecho Dan” ©1975 Music and Lyrics by: Googie Arthur and Dickie Don Rio for Agita Records-All Rights Reserved)

Catch up on previous episodes at: http://lakewoodobserver.com/read/special-section/the-rockport-miracles