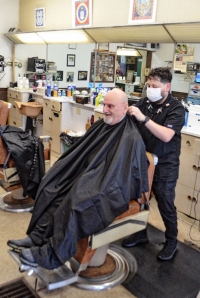 Joe Palange gets his customary hair cut from ose Rodriguez at Belle Barbershop.

This is a feel good story I just had to share. My dad Joe Palange was diagnosed with Dementia a few years ago and unfortunately it has gotten worse. Every Tuesday, I take him for either a shave or haircut at the Belle Barbershop in Lakewood. Steve Sink or Jose Rodriguez will take care of him. My dad will sit in the chair and look at all of the pictures on the wall, mostly fighters like Muhammad Ali or Rocky Marciano.

My dad's uncle was Sammy Derrico, Clevelands AAU and Golden Gloves Flyweight Champion in 1936. He became Featherwight Champion in 1940 and went on to Golden Gloves Champion in 1942. Unfortunately his promising career ended when he was injured in WWII. He stayed in the sport as a trainer for Michael Spinx and many others. He was entered into the Cleveland Boxing Hall Of Fame in 1986. My dad Joe always hung around his uncle and got to know Sugar Ray Leonard and Muhammad Ali, but always called him Cassius Clay.

At the barber shop, my dad would repeat himself several times that a picture on the wall was Sammy. God love Steve and Jose for thier patience with him. A few weeks back they actually found an old photo of Sammy and put it up on the wall for my dad. It brings a tear to my eye to think just how thoughtful and kind it was for them to do this.

In this day and age, it's nice to know there are truly good hearted people out there. Steve and Jose are two of the best. They didn't have to do that, but they did and it made my dad smile.