One Lakewood Progress: Riots Are The Cries Of The Unheard 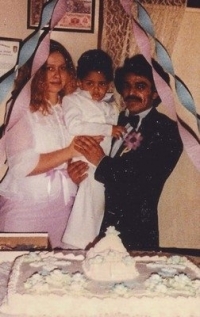 Picture of the writer's parents.

I remember my Uncle Bob telling my mother that she couldn’t move back home to Southern Ohio with us because we were “Spics” and the community would never accept us. My mother faced housing discrimination because white landlords didn’t like the “look” of her children.

At both of my first jobs, I was wrongfully accused of stealing money from cash registers, even though I was off work during those times and would never steal a crumb from anyone. That’s why I worked two jobs, and when defending myself against these accusations, told my employers as much. I was exonerated in both instances, but knew why I was singled out over my white co-workers.

When walking with my mother one cold October night to the corner store, I suddenly felt a stinging sensation on my legs. When I looked down, I saw the remnants of eggs sliding down my jeans. I looked up as the perpetrators across the street screamed “Puerto Rican Bitch!” and ran off.

When running for city council in Lakewood last year, I came across an older white gentleman who was not a supporter, “with all due respect, because we don’t need more Blacks and Hispanics here. The crime rate will go up!” Section 8 was also bad, he said, for the same reasons. “We have a nice town here. We need to keep it that way.” I remember juggling whether or not to tell others of the exchange and just told my immediate family. I didn’t want to draw attention to my race in a negative light during my campaign even though some people in the community already viewed it that way. It made my mother angry. “You should never have moved there,” she said.

My dark-skinned brother has been a victim of unlawful traffic stops (my father was too). One police department slammed his body against thecar after removing him from it and beat him while calling him and all “spics like him,” dogs. He has been pulled over and wrongfully accused of being a drug dealer or, vaguely, of being person of suspect. One time, he was even taken all the way to a police station and held there for hours before he was let go. I feared for his life. No apologies from the police for that one. They had his car impounded, which he had to pay to get released even though he had committed no crime.

I share these stories to illustrate a point about black and brown communities in the United States. We all have had incidents unique to us and unique to our race that have occurred. Not uniquely is that it all boils down to the same result - people fear, stigmatize, and segregate themselves from what they don’t know or understand.

The segregation, fear and stigma people feel about black and brown people has been institutionalized as public policy in the United States (think segregated drinking fountains, internment camps, segregated schools, red-lining, and immigration policy, to name a scant few). But policy also comes in the form of practice and the unspeakably unjust death of George Floyd, unarmed while black and sitting (as well as of Ahmaud Arbery – unarmed while black and jogging, and Breonna Taylor – unarmed while black and sleeping) should clue us all in to the fact that conditions still exist in the United States that cause people to feel that they must engage in riotous activities to be heard.

This is the first time I have publicly come forward to talk about racism and how it has affected my life. By and large, most affronts and crimes of racism go largely unpunished. Our communities suffer in silence, because we feel no one in power will listen. When we see racially motivated deaths like those of Tamir Rice and Michael Brown caused by those who are sworn to protect us, we can’t help but feel that we would be inviting harm onto ourselves and our families by speaking up individually.

But riots, as they are, are the voice of the unheard. A collective cry, and last resort, from those who are ignored and made to feel as if they don’t belong – as if their lives matter less to the world as the same life of someone with white skin. The right of the oppressed to protest is indelible and endowed upon our citizens in the founding documents of our country (the Declaration of Independence and the Constitution). As former President Barack Obama recently penned, riots are often the only way marginalized communities can seek out justice and make their concerns heard in a way that will spur action. It shouldn’t have to be this way. It shouldn’t still have to be this way.

Many people have condemned the riots that have followed George Floyd’s death. I don’t share that belief. Condemning the pain and frustration shown by the only community in our nation that was forced to come here against their will, was left to fend for themselves after years of forced slavery, have suffered as the victims of lynchings, cross burnings, and wrongful imprisonment, as well as racial prejudiced that was once openly commonplace in our country, minimizes their suffering. It minimizes the enormity of the situation that after years of incremental steps forward in racial equality, black and brown communities are nowhere near as equal as many people would like to believe.

People who condemn these riots seem to be more concerned with the maintaining the status quo than they are about justice, equality and the inalienable human rights of fellow human beings. Conditions continue to exist in our society that causes unprovoked and unjustified deaths of American citizens because of the color of their skin: THAT must be condemned as fervently as one would condemn these riots.

When people say that Black Lives Matter, it is not to imply that Black lives matter more than your life, or more than police lives, or soldier's lives, or children's lives, or of white lives, but rather that in 2020, black people are still fighting for their lives to matter just as much as yours does. They are seeking nothing more or less than equality.

Laura Rodriguez-Carbone was a candidate for Lakewood City Council, Ward 1. She is a community leader and advocate with nearly 20 years of experience in the federal and non-profit sectors in fund development, community engagement, and cultivating and expanding multi-sectoral partnerships. She continues to give of her time through service on several public, non-profit, and national boards. Laura is the Community Outreach Coordinator for the Centers for Medicare and Medicaid Services under the umbrella of the U.S. Department of Health and Human Services, working to advocate for the care of all dialysis patients in three States - Ohio, Indiana and Kentucky.