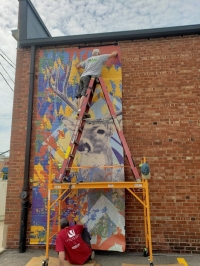 The first of two new public art murals at the intersection of Warren Road and Madison Avenue went up on May 27.

For this mural, located behind Fifth Third Bank, local artist April Bleakney was inspired by an encounter she had with a deer while in Yosemite National Park, and came to appreciate the peacefulness and serenity this animal symbolizes.

LakewoodAlive thanks April and its many terrific partners, including the City of Lakewood and Cuyahoga County, for making this collaborative project possible. Install for this mural was completed by Scherba Industries. LakewoodAlive looks forward to sharing more details about phase 2 of its Warren Road Beautification Project in the coming weeks.

I am the Marketing & Development Manager for LakewoodAlive. I enjoy all things Lakewood, especially walking my basset hound through Madison Park.