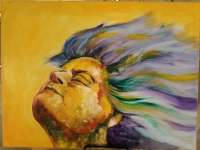 The Barton Senior Center's Talent Exhibit on February 23 demonstrated that there is no age limit when it comes to being gifted. Held in two locations within the Center (on the ground floor of the Westerly Senior Apartments), the event featured residents' paintings, photography, quilts and other unique pieces, one being a vinyl record that was molded into a ruffled bowl.

The Barton member who organized the show summed it up with "this is the epitome of patience and perseverance," acknowledging the amount of time and effort that went into much of what was on display.

Susan Lucas added, "I had no idea so much talent is housed in this complex." Her remark was echoed by many. Other praise included "awesome experience," "fantastic artwork from everybody," and "one of a kind." A crowd favorite was Anna Baker's portrait of her grandparents. It was so well done many thought it was a photograph. Another artist did use a camera to capture images of wildlife, fall foliage and travel landscapes. Needle crafts were also greatly admired by attendees.

Following the visual arts presentations, the celebration moved into the facility's Rotunda. Janis Zemzars, a classically trained pianist, played compositions by Chopin and Debussy. Vocalists sang popular tunes ranging from "Smoke Gets in Your Eyes" to "The Rose." The afternoon concluded with the audience singing along to "Joy to the World" by Three Dog Night followed by Barton member "Hippie Chatty Kathy's" interpretation of "Old Time Rock & Roll" from Bob Seger & The Silver Bullet Band.

The Barton Center's Talent Exhibit provided a venue where creativity could be viewed in a formal setting. Some participating artists were asked if their pieces were for sale. It was also a way for the senior community to come together for an inspiring and uplifting afternoon.

They say "beauty is in the eye of the beholder," and on that day there was plenty to behold.