The Rockport Miracles-Part 4: Episode 22: The Ballad Of Derecho Dan Continues: 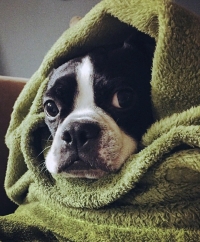 “The lizard’s roar will come from the north. When you hear it, destroy the manifesto! Say your prayers! Take the sunshine pill, and fire up the engine! It is time to put that treasonous lizard into a watery grave!" (Excerpt dated 8/30/75 from Maynard Gridley’s “Manifesto With Cheese.”)

Police Chief Tom Graber wasted no time rushing to the Rockport Animal Hospital at Fire Chief Nicholson’s request. Graber had been on a fruitless search for Little Dan ever since he’d escaped from the hospital days earlier. The Chief had a hunch, however, that his luck was about to change.

Fire Chief Ned Nicholson had already entered the exam room with the veterinarian by the time Chief Graber had arrived. Graber immediately noticed a car tire outside the door. Entering the room he saw a pile of empty potato chip bags, Hostess Twinkie wrappers, and a plastic sandwich bag labeled “TUNA SALAD SANDWICH – 59¢.”

The veterinarian and Chief Nicholson were standing over a small, somewhat disheveled object, wrapped in a blanket. “Hey Tom--check it out!” said the Fire Chief, motioning him over to the table. Tom Graber gently pulled the blanket away so he could see what all the fuss was about. His eyes nearly bugged out of his head. The police chief raised his arms towards the heavens and screamed, “Hallelujah!!”

Meanwhile, Rowena was at Rockport Hospital visiting Wilmena, who was her big sister and Little Dan’s mother. Wilmena had been gravely injured during storm 5.4 when the house that she and the late Big Dan Newman bought in 1955, collapsed on top of her during the storm. She was critical for weeks and probably should’ve died. Fortunately, Rockport Hospital was only five minutes away and because it was so close, they were able to save her.

When Rowena walked into her room, Wilmena shouted weakly, “There you are! Where’s my son?! Where’s Little Dan?” Rowena tried to calm her down. “Wilmena, you haven’t been well and I was just waiting for the right time to…”  Wilmena abruptly interrupted her, “NOW IS THE RIGHT TIME!” she screamed.

Rowena sat down on the edge of the bed and told her everything that had happened. “I’m so sorry. I loved Maynard. But, I don’t want to lose my boy, too!" cried a despondent Wilmena, "You have to bring him in before he gets hurt!” At that very moment, both Chiefs of Rockport barged into Wilmena’s hospital room clutching the mysterious object wrapped in a blanket. Rowena reacted angrily, “What is this? My sister cannot be put under any stress!” Both chiefs stopped. "Relax,” said Chief Graber, holding up his hand in defense, “we have something here that will help RELIEVE that stress!”

As the two chiefs unveiled their surprise package, Little Dan was still in the Cleveland Flats, secluded on Maynard Gridley's dynamite loaded boat, "The Friggin' A." He’d just finished reading the last passage from Maynard’s wine-stained “Manifesto with Cheese.”

The passage instructed whoever piloted the boat to “take the SUNSHINE PILL and fire up the engine.” Little Dan was able to locate the so-called “sunshine pill” inside an ashtray laying on the boat’s control console. It was wrapped in a piece of rainbow colored paper with a note attached. The note said, “Have a good trip, you bull-goose looney! We’ll miss you Maynard-man!” It was signed, “Yer prankster pals, Ken K and Stanley O.”

Back at Rockport hospital, everyone in Wilmena's room were focused on the object wrapped in a blanket. “Goddam, what izit?” demanded an impatient Rowena. Finally, the blanket was unpeeled and its contents caused Wilmena and Rowena to let out gasps, followed by cheers and tears of joy.

It was Little BD, the Newman's beloved Boston bull dog!!!

He'd been given up for dead after the Gas & Lube explosion, but there he was! The Fire Chief explained he'd been trapped inside a used tire that'd been blown into a tree by the explosion. Lester Brown’s lost cockatiel kept the dog alive with potato chips and twinkies flown in from the smoldering ruins of the Gas & Lube. “We can’t explain the tuna sandwiches..." said Cheif Nicholson, "...too heavy to be carried by a cockatiel.”

Days later, an examination of the bird droppings on the tire indicated that Little BD had received additional support from a good samaritan crow able to deliver take-out sandwiches.

Just then, everyone in Rockport heard the sickening, ominous sound. It was loud enough to be heard as far north as Windsor, Canada and, as far south as Akron, Ohio. Down on the Cuyahoga River, Little Dan heard it just as he’d finished reading the last page of Maynard’s manifesto. Back at Rockport Hospital, the joyous reunion of Little BD, Rowena, Wilmena, and the Safety Chiefs was cut short by the sounds of the approaching storm. “ROWENA!”  Wilmena shouted hoarsely, “You must take these men to Little Dan, at once!”

Then, another roar came sledding down from the darkening northern skies over Lake Erie. Little Dan knew it was his cue to "take action." He tore the "Manifesto with Cheese" in two and tossed it into the Cuyahoga River. Then, as instructed, he swallowed the "sunshine pill," shook his fist at the blackening skies, and screamed, “GODZILLA!!!”