Lakewood City Council Gets Settled In To Govern 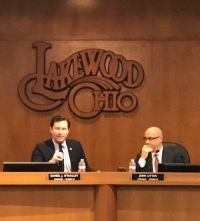 Mayor George began the swearing in of City Council by introducing Judge Patrick Carroll. Judge Carroll went in order of the wards to swear in the four councilpeople. Each new councilperson brought a loved one up when they were sworn in to share in the experience. Ward 3 Councilperson John Litten’s daughter stole the show when she realized she was helping swear in her dad.

Once the swearing in ceremony ended, there was a brief recess before the first official Lakewood City Council meeting of 2020 would begin.  When the session began, Council at Large Councilperson Tom Bullock led City Council in the selection of President of Council. Councilperson Litten nominated Councilperson O’Malley which was seconded by Councilperson Bullock. There were no other nominations, and it was a unanimous vote for now Council President O’Malley.

Mayor George made two appointments for City Council confirmation. She appointed Brian Corrigan as Law Director and Roman Ducu for Director of Public Works. Both individuals have a long history of service to Lakewood.

Cove Church property has completed step one of a two-step process. Step one was to narrow the eleven bids to redevelop the property down to three. They will publish the results of the search on the city website along with the interview criteria that will be utilized to select the finalist between the remaining three.

Trinity Church will be the new headquarters for Scalish Construction. They are excited to expand upon their almost twelve years of being a Lakewood company.