For The Modern Teen: Reviews Of Recent Releases By Local Bands, Pt. 99 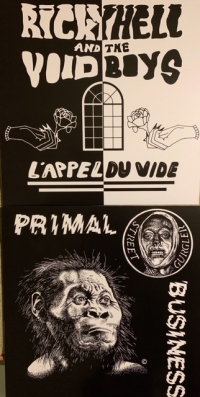 This is either the second or third Ricky Hell & The Voidboys album (depending on whether you wanna count "Satan Of Cool," which had 8 songs and was cassette only– and actually, it could be the fourth or fifth if you say "Killed By Ricky" and "Hell Is Real" are Voidboys releases, since they do have that band on them and since they were combined to make up "Welcome 2 Hell," which was then rereleased as "Ricky Hell & The Voidboys" later. This band has the most complicated discography of any Quality Time group as far as I'm concerned.)  It kicks off with some kind of blaxploitation spoof before kicking into the opening song, "Life In A Northern Town Again," a nod to Dream Academy's 1985 release. Side A is made up of mostly the kind of things you expect: decent, usually catchy punk-pop. "It's Not Really You" is pretty good, as is "Strychnine" (which has what I think is a pretty cool melancholy clarinet line during the chorus, but it's so deep in the mix I'm not certain it's clarinet). Clarinetist Adam Spektor also does some good stuff on "She Always Knows What To Do"; he's at his best here when he's providing a melodic line instead of just the noise stuff, which feels unnecessary a lot of the time. Side B is definitely the winning side here. "Alaska" starts with an electronic kind of intro that gives way to an early '80s sounding post-punk/synth thing, which then abruptly ends and then the actual song, a slow and kinda sad one starts. Noah Depew plays lead guitar here and Kevin Roche (who I think was in Pack Wolf) adds a nice glockenspiel part. It doesn't sound like anything else here, and that's good. "We're So Vain" and "Burn The House Down" are both pretty good, catchy power pop/punk/indie rock type things, and along with "Romantic Comedy" remind you that Ricky really can write good, catchy songs. "Romantic Comedy" is the one that really sticks in my head here, and since there's no backing vocal credit for it, I assume that it's Ricky doing a falsetto, which is a new move for him, I'm pretty sure. "Amnesia" closes out the album with a typical Voidboys style punker, but with Ricky's usual soft and murmury vocal stylings. He's kinda buried in the mix here and the song also feels like it's over after about 20 seconds. I'm not sure it was the best choice for a final track, but there it is. I still don't really like the sound of this band (or maybe I just don't get it)– I don't like the drum machine, I don't like the layer of noise gunk or whatever you wanna call it on them, and sometimes the performances seem less than lively. I guess the band has an actual drummer now (John from The Roobydocks) and he'll be on the next release, so I'm interested to hear how that changes things– almost certainly for the better in my book. I know it seems like I'm always very harsh with this band, but it's because I truly respect all the guys involved and I know that they can make great stuff, so when they're making stuff that's less than great, it's frustrating. That isn't to say that this record is a waste of time or anything by any means; again, most of the songs on the second side are really good and there's a couple winners on the first side as well. By and large, I am a fan of Ricky's work and if you are as well, it's worth checking out. 3.33/5

Street Gurgler (with members of Spike Pit, Splat, Brainwashed California, and many other bands) make their studio debut here. They play a good very hard rock-influenced style of punk, with lots of space rock influence and just a touch of metal. It's pretty good stuff. The band is super tight and a lot of the riffs are killer ("Cat Nip" is a great example). I'm wondering if they got Mr. California a real synth to play on here or he just used his phone– either way, the synth sounds cool. The really unique element that this band has is their singer Meggie, who's a very distinctive presence here. The label description made a comparison to Patty Donahue from The Waitresses, but that's not quite it (well, maybe on "Sad" a little bit). I can't quite place it, really. She sings with the energy of an amped-up ten year old (and sometimes with the lyrics to match– see "Food" for one, not that the tale it tells couldn't necessarily be a universal experience), and I mean that in the best possible way. The sum of all the players here makes for a really enjoyable experience. The music rips and the whole thing is just a good time. Even on the songs that aren't really the standout ones, or even when sometimes it sounds a bit samey, it's still really fun to listen to. My favorites here were the opening track "Gross," which really lets you know what you're in for, "Ways To Die," the aforementioned ripper "Cat Nip," the pounding and manic (well, they're all pounding and manic to some extent) "Happy Bunny," "Reality Land," and "Magic Donkey," especially the part at the end where all the free jazz and feedback starts to sound like sirens and then Meggie starts singing along with it. My biggest complaint here is that I don't like the cover art at all– it really doesn't fit with the band. The Hawkwind-esque (Hawkwind-by-Rubber Mate, perhaps) art on the back is very cool, though. Altogether, a pretty cool record. 3.9/5

Are you a local-ish band? Do you have a record out? Email vaguelythreatening@gmail.com