Save Ohio's Wetlands And The Copperbelly Water Snake! 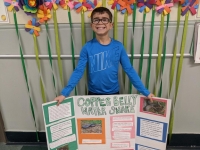 Did you know that the copperbelly water snake is endangered?

Did you know that the copperbelly water snake lives in Ohio?!

The copperbelly water snake is a non-venomous snake that grows 2 to 4 feet in length.

It has a black back with a bright orange-red belly. Females grow larger than males; most copperbellies over 30 inches long are females.

Copperbelly water snake habitats are wetlands such as streams and ponds and wet grass areas.

Copperbellies hibernate in crayfish burrows and in wetlands with lots of trees.

They stay underground from late October until late April.

Why are copperbelly water snakes endangered?

People are using their wetland habitats for roads, houses and other development like shopping malls.

The copperbelly water snake needs many wetlands over a large area. When people destroy parts of their habitats, they die.

Predators such as skunks, raccoons, raptors, and snapping turtles, eat copper belly water snakes especially if the snakes travel across cleared areas, such as roads, mowed areas and farmlands.

Copperbelly water snakes are collected because of their rarity, large size, cool colors, and value in the pet trade.

Under the Endangered Species Act, it is illegal to  collect them without a permit from the U.S. Fish and Wildlife Service.

The copperbelly water snake is protected under the Endangered Species Act when it was listed as threatened on February 28, 1996.

What Can I Do to Help Prevent the Extinction of Species? (From U.S. Fish and Wildlife Service.)

What are the benefits of helping an endangered or threatened species? (From U.S. Fish and Wildlife Service)

Actions taken to provide habitat for the copperbelly and other listed species also benefit a variety of wildlife that uses similar habitat.

You guys and girls need to let go of your fears of snakes and start saving this rare Ohio snake!

Mary McCool Berry is a 30 year Lakewood resident and retired Lakewood City Schools educator (31 years). McCool Berry is the author of numerous grants funded to bring deep learning experiences to Lakewood's students. Mary McCool Berry, M.Ed., is the founder of Schools with Soul, works as an independent educational consultant. Schools with Souls is an organization dedicated to bringing whole child, experiential, project based learning to all children in every school. schoolswithsoul.com