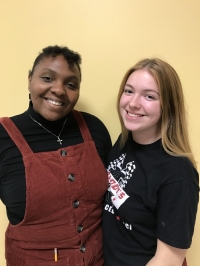 When Lakewood High junior Olivia Patterson was asked by one of her teachers to apply for a new City of Lakewood task force that would be in charge of developing the city’s first Youth Council, Olivia jumped at the opportunity. “I really wanted to make a difference and youth don’t usually get the chance to make a change in the city,” Olivia said.

The new Lakewood Youth Council will officially launch in January but the hard work behind the creation of this exciting new advisory group for our city has been going on since April thanks to the dedication of Lakewood High students such as Olivia, who is the task force's chair, and senior Tully Worron, vice chair. Olivia, Tully and seven other current or recently graduated Lakewood High students worked with city officials to develop the framework of the new council including its guiding by-laws. The by-laws and council’s mission statement were approved by the city in July and City Council then appointed those students on the task force that were not graduating to become members of the Youth Council going forward.

Like Olivia, Tully knew right away she wanted to be involved from the ground up with the task force. “Growing up in Lakewood, the youth of the community never really had a voice, except to tandem off of our parents’ views and involvement. I am passionate in politics and have always been involved in local government through my parents, but I wanted to join the Youth Council so I could really have my own stake in the community.”

The task force members are now in the process of interviewing applicants for the remaining openings on the council to boost the group to 15 members. Members must be residents of Lakewood and can be in eighth grade through freshmen in college. Current members from the task force besides Olivia and Tully are Yusra Abdi, Siwita Ali Shah, Collin Hunt, and Tristan Rumsey. Class of 2019 members of the task force were Elizabeth Halko, Jack Hueter, and McKenzie Lane.

The task force members appreciate the city giving our community’s youth the chance to be heard. “It’s nice to have a voice outside of school,” Olivia said.

Some of the issues the task force envisions the new Youth Council tackling include vaping, drugs, and mental health.

The task force members have undoubtedly gained valuable experience and skills navigating the process of creating a government advisory body.

Said Tully:“I have already learned so much about government and the process of government in just the few short months…I have been lucky enough to gain leadership experience as well as feeling even closer with my community.”

City of Lakewood Community Relations Specialist Melissa Garrett, who has been working with the task force, has been more than impressed with the group. "The students have been amazing—they give me hope for our future," Garrett said. "They put together the guidelines for the council in a very short period of time and have been working diligently to get this Youth Council up and running. I can’t wait for their first official meeting."