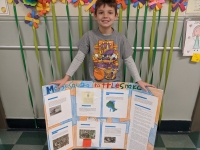 Have you heard of the Eastern Massasauga snake living in Ohio? I am speaking for this important reptile.

Save the Eastern Massasauga Snake!

Did you know that Eastern Massasauga snake is a threatened reptilein Ohio?

They need our help!

Massasauga rattlesnake are important in Ohio!

The number of the eastern Massasauga has been going down for 30 years and is due to wetland habitat loss.

Biologists say that less than half of the eastern massasauga’s populations still exist.

If we continue to lose eastern Massasauga populations, the species will be extinct in the future.

Today, scientists believe 90 percent of the population will go down over the next 50 years.

The Eastern Massauga snake will shift the habitats they use, depending on the season. Mostly, they use wetlands in the spring, fall, and winter.

Hibernation places are located below the snow line, close to the groundwater level. They need  water that does not freeze in winter. This is critical for their hibernation.

They also will eat other snake species and sometimes birds and frogs.

Eastern Massasauga snakes are threatened or endangered where they live because of humans and habitat loss.

Scientists are studying the eastern massasauga to learn about its life, about how it uses its habitat, and how we can help the Eastern Massasauga water snake and its habitat.

People are afraid of snakes.

The Massasauga is actually a shy, peaceful snake that strikes humans only when it feels threatened and cornered.

Massasaugas are often killed when they show up near homes or businesses, and people may kill them.

Many remaining populations of massasaugas are on public land and privately owned natural land.

The U.S. Fish and Wildlife Service is working with people to avoid harming the Massasauga and its habitat.

It is important for people who live in Massasauga areas to be careful, but the Massasauga is also an important and beautiful part of these areas.

I hope that learning about the nice nature of the snake, its habits, and its role in the ecosystem will help people feel more comfortable living with this rare snake.

Mary McCool Berry is a 30 year Lakewood resident and retired Lakewood City Schools educator (31 years). McCool Berry is the author of numerous grants funded to bring deep learning experiences to Lakewood's students. Mary McCool Berry, M.Ed., is the founder of Schools with Soul, works as an independent educational consultant. Schools with Souls is an organization dedicated to bringing whole child, experiential, project based learning to all children in every school. schoolswithsoul.com