A Lake Erie Shipwreck: Past, Present And Future 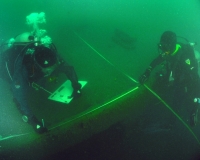 For most of us, Lake Erie is a broad expanse of beautiful water, a recreational highlight of life in Lakewood. But Lake Erie was once a bustling commercial water highway and below its surface lie hundreds of shipwrecks, abandoned in the murky depths of the lake. One of these wrecks is the Dundee, a wooden schooner that went down in a storm that swept over Lake Erie in September of 1900.

You can learn more about the Dundee on Wednesday, December 11, 2019 at 7:00 p.m. in the Main Library Auditorium from Carrie Sowden, Archaeological Director of the National Museum of the Great Lakes. She will discuss the history and archaeology of the Dundee and plans for its future preservation.

The Dundee was carrying a load of iron ore to Ashtabula on September 11, 1900 when the tail end of a hurricane swept over Lake Erie and caused the ship to founder eleven miles west of Cleveland. The schooner lost her rudder in the waves, and the captain and crew climbed up the rigging and lashed themselves to the masts. The cook, Kate Hoffman, was lost in the storm and her body was never recovered. The remaining six crewmen were rescued. The Dundee was discovered in the 1980s and has since become a popular scuba diving site.

Join us on December 11, 2019 at Lakewood Main Library to discover more about Northeast Ohio’s maritime history. This program is co-sponsored by Lakewood Historical Society.