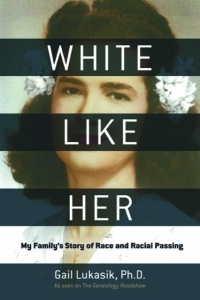 What if your family history research revealed a long-hidden family secret? Award-winning author Gail Lukasik grew up with few photographs of her mother’s family and in 1995 she discovered the reason why. When researching census records for her Louisiana family, Gail discovered that her mother’s father and his entire family were designated as black. “You can’t tell anyone,” said her mother Alvera.

The discovery of her mother’s racial heritage brought Gail into the fascinating world of family history and genealogy. Gail appeared on PBS’s Genealogy Roadshow in an effort to unpack her conflicting past and uncover the records that traced her family back to eighteenth-century colonial Louisiana. Her experience on the show and her research into her mother’s family is the story behind "White Like Her: My Family’s Story of Race and Racial Passing."

Part memoir and part social history, "White Like Her" explores what it means to know where you came from and who your people are. It is the story of Alvera Frederic, a young woman from the Jim Crow South who migrated North and kept her racial identity a secret from everyone, including her own husband. Ultimately the family settled in Cleveland, where Gail’s story begins.

Gail was raised in Parma and performed as a member of the Cleveland Civic Ballet Company. After working as a freelance writer, Gail earned a Ph.D. in English and is now the author of four mystery novels, a book of poetry, and numerous essays and short stories.

Alvera and Gail are just two of the voices in the greater story of race and racial passing in America, but the pursuit of heritage is a common thread for individuals of all backgrounds. Gail Lukasik will share her story on Thursday, November 14, 2019 at 7:00 p.m. in the Main Library Auditorium. Books will be available for sale and signing.