Cuyahoga And Its Burning River 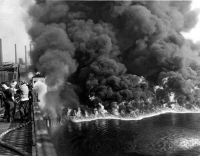 The Cuyahoga River dates back 12,000 years, but it was the fire in 1969 that made it famous. Even though it was not the first or the worst, the 1969 blaze caught the attention of the country, making Cleveland the butt of jokes and spurring the creation of the Environmental Protection Agency.

The Cuyahoga River and its colorful history will be the subject of a talk by the Western Reserve Historical Society on Wednesday, November 13, 2019 at 7:00 p.m. in the Main Library Auditorium.

Formed when the last glacier retreated across Northeast Ohio, the Cuyahoga River is 10,000 to 12,000 years old. For centuries, Native Americans used it for food and transportation. In 1796, it was the river and its promise of transportation inland that led surveyor Moses Cleaveland to form a settlement on Lake Erie. Over the next century and a half, business grew on its banks and industrial waste was dumped directly into the water. In 1881, the mayor of Cleveland called it an “open sewer.” Over a dozen fires occurred on the river, caused by oil slicks and floating debris. The 1969 fire was minor compared to previous fires, but the time was ripe for social upheaval and environmental protest. People around the country took notice, and in 1972, the Clean Water Act was passed.

Cleveland did not fare well after the fire. The mayor’s hair caught on fire, population declined, factories closed and the city become fodder for late night comedians. But by the late 1980s, the Cuyahoga was improving and Cleveland began to embrace the “burning river” moniker. There are currently 90 active businesses registered with the state that have “burning river” in their names. The Cuyahoga has improved to the point that fishing is now encouraged, kayakers abound and birds have returned to its banks.

Join us at the Lakewood Main Library on November 13, 2019 to find out more about the history of the Cuyahoga River. This program is co-sponsored by Lakewood Historical Society.