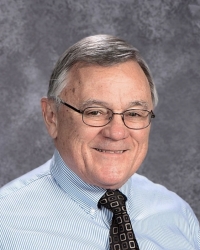 Northwestern University’s Midwest Academic Talent Search is known for recognizing high achieving students. However, their mission also incorporates parents and teachers in a quest to support gifted students. In fact, elementary and middle school students who are recognized based on their exceptional PSAT™8/9, SAT®, or ACT® scores can in turn nominate their teacher.

This recognition was bestowed on Chuck Debelak, of Lakewood, based on his impact on just one of his students. However, the award highlights his career-long achievements in innovative, gifted education. He and his wife Helene founded Birchwood School in 1984 to give children the best education possible and both have been recognized by Northwestern University’s Midwest Academic Talent Search many times over the last 20 years. He currently teaches mathematics to fifth through eighth graders at Birchwood School of Hawken on Cleveland’s west side.

Chuck Debelak has received much recognition over the years including Math Olympiads Highest Team Award in 2012-13, being named Ohio’s MathCounts Coach in 2011, and a three-time recipient of the Ohio Governors Award for Excellence in Math and Science. But the success of his students is his most proud honor. Last year Birchwood had 90 students qualify for Northwestern University’s Midwest Academic Talent Search with 34 students choosing to participate. Over the past 3 years, 70% of Birchwood students in grades 3-8 have been invited to participate and 5% of them went on to finish in the top 2% of all participants.

Birchwood School of Hawken is a private, coeducational school in Cleveland, Ohio. Founded in 1984, Birchwood serves students in kindergarten through grade 8. Birchwood's mission is to equip children to lead a life of becoming – growing, thriving and flourishing – through the development of intellect and character. The school is located at 4400 W 140th St in Cleveland.

Birchwood School alumni writing some press releases for them.