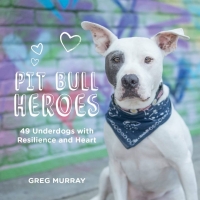 When it comes to dog breeds, pit bulls have the reputation of posing a dangerous threat to our neighborhoods. Greg Murray’s latest book proves that these dogs can have a very different role in our community. Former strays, working dogs, family pets and social media stars are among the “Pit Bull Heroes: 49 Underdogs with Resilience and Heart.”

One example is Charlie, a Lakewood resident and pit bull mix whose story rallied hundreds of supporters together and resulted in the end of the pit bull ban in 2018. Lakewood photographer and animal rescue advocate Greg Murray was one of the voices leading the charge against breed specific legislation in Lakewood.

Charlie is just one of the dogs profiled throughout the book, which shows that man’s best friend is not limited to one dog breed. The stories are inspiring and unexpected. Chad serves as a therapy dog at the Children’s Hospital of Philadelphia; Apollo sniffs out narcotics as a police dog, and dogfighting rescue Meryl is now inspiring others and wagging happily at an animal sanctuary.

Many of the featured dogs come from Northeast Ohio. Greg himself is a Northeast Ohio native who lives in Lakewood with his wife, Kristen, and their two rescue dogs, Leo and Kensie. His work has been featured in Huffington Post, Today, Daily Mail, Elle, People, Cleveland Magazine and other media outlets throughout the world.

Hear the stories behind the photos on Thursday, October 17, 2019 at 7 p.m. in the Main Library Auditorium. Greg will discuss the book and the dogs that inspired its creation. Books will be available for sale and signing at the event. Greg’s photography is also on view in the Main Library Second Floor Gallery through October 31.