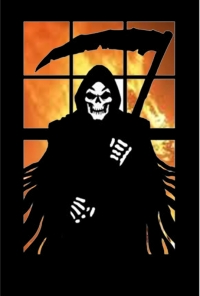 Truer words had never rolled off Little Dan’s lips except for the fact that he hadn’t lost his mom. Though not well, Wilmena Newman had been slowly recovering in the hospital from injuries sustained when a house fell on her during the previous Storm 5.4. What Little Dan had truly lost was her stabilizing presence in his everyday life, her famous tuna salad, and her disciplined approach to making sure the auto shut-off valve switch was activated in case the gas pumps ruptured. The auto shut-off kept the underground tanks from exploding in the event a car or an out of control acetylene tank crashed into them and caught fire. When Rockport Storm 5.5 came calling during the wee hours of that ill-fated morning, the latter scenario became a deadly reality.

Miraculously, no one had died but there were plenty of bruised and broken bones to go around. Most remarkable, as a later study revealed, was how many people in Rockport were having “dare” sex during the worst moments of the storms. The same phenomena had been observed in England during the Nazi blitz. The study reported that the adrenaline rush of getting it on while the grim reaper’s gnarled fingers are rapping on your windows is an impulse that some folks find hard to resist. After no fewer than 20 houses along 150th street had gone up in flames, red-faced firemen discovered that nearly half of them contained residents in a state of en flagrante delicto, with no clue that their houses were on fire.

Meanwhile, in the emergency room of Rockport Hospital, Little Dan was laying on his gurney, wild-eyed and continually murmuring over and over again, “I lost my dad, my mom, my dog, and the Gas & Lube...” Then, a familiar face appeared at his gurneyside. It was his Aunt Rowena Gridley, the younger sister of his mom, Wilmena, and the mother of Maynard Gridley.

Rowena was wearing the tear-stained face of someone who’d been crying all night. “Little Dan,” she said while pinching his arm. “Little Dan, there’s no good time to tell you, so you may as well get all your bad news at once. It’s about Maynard…” Before she could continue, a large group comprised of agitated, injured and in some cases, scantily-clad neighbors of the Gas & Lube began tumbling into the ER. When they caught sight of Little Dan, they hurled vengeful threats in his direction blaming him for either destroying their homes or interrupting the best sex they'd had in years.

Rowena began to fear for Little Dan’s safety when the staccato sounds of Mediterranean style profanities filled the air and violent shoving broke the angry mob apart. It was the three Joes to the rescue! They’d left at daybreak after every mother and grandmother in Little Italy had loaded them up with enough pasta fazool to feed the entire west side of Cleveland. Being confronted with first generation urban Italian bricklayers armed with masonry tools was enough to cause the wimpy suburban crowd to retreat.

With the threats momentarily neutralized and the three Joes standing guard, Rowena continued with her tragic news. “Little Dan…Maynard is dead.” The three Joes gasped and uttered the words, “Madre di Dio.”

“He was a block from our home,” she said holding back tears, “when a drunk driver ran a stop light and crashed into his motorcycle. He died at the scene.” The three Joes started to cry. Little Dan was still out of it and kept repeating, “I lost my dad, my mom, my dog, and the Gas & Lube...”

It was just as well that he’d remained in his state of shock. After the fire department determined that the Gas & Lube’s auto shut-off valve had been deactivated, charges were immediately filed against Little Dan. Police Chief Tom Graber stormed into the hospital, pushed his way through the foaming crowd, and handcuffed Little Dan to his gurney. The arrest caught the attention of the mob and emboldened them to renew their threats on Little Dan’s life. When a small riot broke out, the Chief and his patrolmen were forced to restore order. A half hour later, when he returned to the area where Little Dan’s gurney was supposed to be, the Chief’s jaw dropped to the floor.

The gurney, along with Little Dan, Rowena, the three Joes, and 100 gallons of pasta fazool had escaped unnoticed and were on the lam!