Whatever Happened To Vegetables? 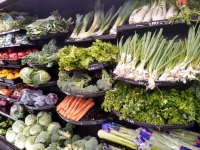 When I was a kid we were told to eat our vegetables. They were supposed to make us grow up to be big and strong, but that wasn't enough to get us to eat them. Parents had to bribe us by threatening to withhold dessert if we didn't consume our peas and carrots. The only vegetables we liked were greasy french fries and buttered popcorn.

Now, vegetables are called “veggies.”  Sounds nicer and more appealing, and not so much like former boxers who took too many blows to the head. I did some research to see when vegetables were renamed. The first reference I found was a 1977 article in the New York Times. Changing vegetables to veggies appears to have been a marketing ploy. People and things ending in “ie” or “y” sound more likeable. It's a suffix of endearment. Billy is friendlier than Bill. Timmy is less threatening than Tim. Still, kids aren't crazy about veggies. Except fries and microwave popcorn.

Educated people, like those interviewed on Public Radio, are now answering every question by starting with the word “So.” It's crazy!

People who work lots of hours are called “hard working.” Who knows if they work hard? If they really worked hard they might get everything done in the standard amount of time. These people are “long working!”

Nearly all businesses today are using the same advertising slogan: “Experience The Difference.”

Chile used to be pronounced the same as chilly. Who changed it, and why?

And how come people can't pronounce “turmeric?” It rhymes with murmur stick. Is that so hard?

A big deal is made of musical artists who are so famous they are referred to by only their first name. Elvis, Prince, Beyonce, Cher. But what if you are a great performer with a common name? I'm pretty sure we'll never have a one-name performer called Bob.

Has there ever been a dumber promotion than pizza carryout insurance?