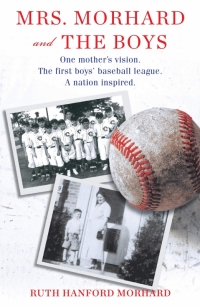 How far will a mother go for her children? Two local authors have written books examining that very question, one a memoir and the other a biography of her mother-in-law.

Join Lara Lillibridge, author of “Mama, Mama, Only Mama,” and Ruth Hanford Morhard, author of “Mrs. Morhard and the Boys,” on Thursday, September 5, 2019 at 7:00 p.m. in the Main Library Auditorium to hear about their writing process and the books that resulted.

This is the second book for each of these authors. In 2018, Lillibridge came out with “Girlish: Growing Up in a Lesbian Home,” which laid bare the sadness and dysfunction of her unconventional upbringing. She wanted “Mama, Mama, Only Mama” to be a lighter, funnier book based on the blog she had been writing for several years. That blog had provided her the discipline of a consistent writing habit and also sharpened her ability to tell a story concisely and with humor. Written as a diary with blogs, articles and recipes, “Mama, Mama, Only Mama” tells the story of Lillibridge, along with her two children, going through divorce, six years of single parenting and into a new relationship. As a writer of creative nonfiction, Lillibridge has published numerous essays in print and online and is the recipient of several literary prizes. She lives in Cleveland.

Morhard’s book grew out of a lifelong love of baseball and her fascination with the life story of her mother-in-law, Josephine Morhard, who built the first boys’ baseball league in America. Josephine, born in Pennsylvania in 1891, lived a hard life. After two divorces, she was left alone with a daughter and son and a butcher shop to run during the Depression. She worried especially about her fatherless son and looked for a wholesome activity that would instill discipline and self-worth in him. She chose baseball. Cleaning out the house after Josephine’s death, Morhard discovered a film produced by the Cleveland Indians about the boys’ baseball leagues which Josephine organized and ran from 1937 to 1944. Morhard kept the idea of a book in the back of her mind while she worked as a senior executive with philanthropic and arts institutions and completed other writing projects. “Mrs. Morhard and the Boys” was published in 2019. She lives in Chardon with her husband, Al, son of Mrs. Morhard of the book title, who eventually became president of the Cuyahoga County Bar Association.